Azealia Banks is crying foul on Russell Crowe after the two got into a physical argument over the weekend.

Crowe was hosting a party of about 10 people at his hotel suite in Beverly Hills on Saturday night. Banks came as the plus-one of Wu-Tang Clan co-founder RZA, who directed and co-starred with Crowe in “The Man with the Iron Fists.”

In a since-deleted Facebook post (screenshot below, courtesy of E! News), Banks wrote, “To recap my night, I went to a [party] at Russell crowes suite, at which he called me a n—-r, choked me, threw me out and spat at me. Last night was one of the hardest nights of sleep I’ve had in a long time. The men in the room allowed it to happen. I feel terrible today.”

However, TMZ reports a different version of the events in question. Witnesses say that Banks laughed at Crowe’s choice of music, and called him and at least one other guest “boring white men.”

Another female attendee then reportedly stepped in to confront Banks, at which point witnesses claim she said, “You would love it if I broke my glass, stabbed you guys in the throat, and blood would squirt everywhere like some real Tarantino s—.” In addition, they say it was Banks who dropped the n-word.

Banks then allegedly cocked her glass back as if to throw it, at which point Crowe is said to have grabbed her in a bear hug, carried her outside and called security.

Also Read: Russell Crowe in Talks to Star in 'The Mummy' Opposite Tom Cruise

Representatives for Crowe did not immediately return TheWrap’s request for comment. 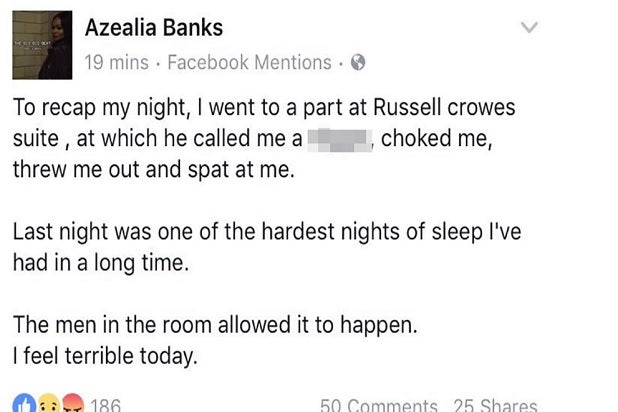 Karen vs. Natalie
When most people think of flipped tables on reality television, they think of Teresa Giudice on "Real Housewives of New Jersey." But she can't hold a candle to Karen flipping the table on Natalie during Season 5 of "Mob Wives." The ensuing brawl ended up being one of the show's most ferocious.
View In Gallery
x