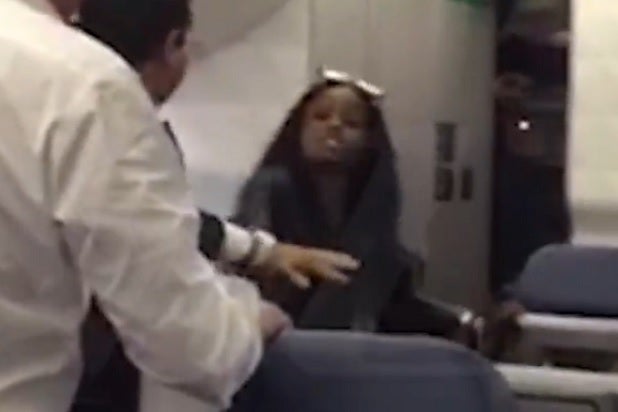 Looks like Azealia Banks is flying the unfriendly skies.

The “Broke With Expensive Taste” rapper threw a major fit and hurled a homophobic slur at an attendant on a flight from New York to Los Angeles early Tuesday morning, as captured in video published by TMZ.

According to a passenger who was unlucky enough to sit next to Banks on the flight, Banks blew up after she was blocked from exiting the plane by a French couple who were removing their luggage from the overhead bin.

The man put his hand out when Banks tried to push past the couple, the witness said, at which point Banks flipped out, spitting in his face and punching him.

A flight attendant grabbed Banks’ bag and attempted to calm her down, which had the opposite effect, as the two began to struggle for the bag and Banks called him a “fucking faggot,” as memorialized in the video.

During the melee the police were called, but the couple decided not to press charges.

Banks claimed that the French man struck her in the face, an account that’s disputed by an eyewitness on the scene.

Brian Kruse, spokesperson for Delta Air Lines, told TheWrap, “We are aware of the situation and are looking into it.”

Watch Banks flip out in the video.