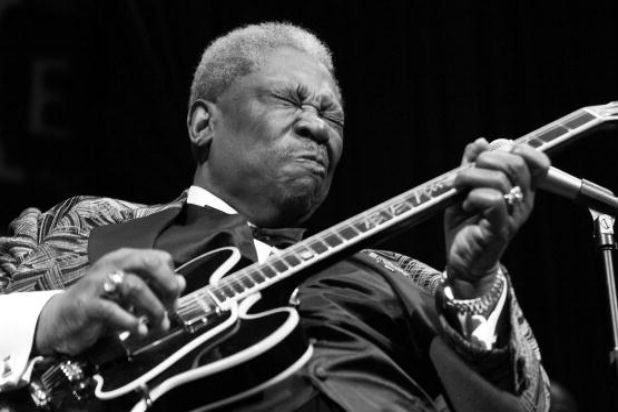 Artists like Lenny Kravitz and Snoop Dogg posted tributes to 89-year-old guitarist, while others including “Tomorrowland” star Hugh Laurie — who played the guitar-loving Dr. Gregory House on Fox’s “House” — and fellow musical luminary Gladys Knight chimed in with their own thoughts, as well.

Morgan Freeman, who narrated documentary “B.B. King: The Life of Riley,” went as far as to say King’s death was such a loss to humanity that it “created a hole in the universe.”

“Needless to say, BB was the greatest blues icon on the planet. He kept us rocking and rolling throughout a seventy year career,” Freeman said in a statement obtained by TheWrap. “His passing created a hole in the universe.”

Inducted into the Rock and Roll Hall of Fame in 1987, King was born in Mississippi in 1925. He was ranked No. 6 on Rolling Stone magazine’s 2011 list of the 100 greatest guitarists of all time after gifting the world with hits “Everyday I Have the Blues,” “The Thrill Is Gone” and “Sweet 16.”

See video: 13 B.B. King Live Performances That Will Get Your Toes Tapping

Read the reactions from artists of all kinds that loved “The King of Blues” below:

BB, anyone could play a thousand notes and never say what you said in one. #RIP #BBKing pic.twitter.com/YvZYH8hyJE

B.B. King, forever and always. Truly, truly saddened – this man has been the soundtrack to my life for a long time. https://t.co/F0gN5v0OTc

What a brilliant man you were. One who will forever be noted as such an inspiration to millions globally, RIP #BBKing http://t.co/9G8NEYTmBT — Gladys Knight (@MsGladysKnight) May 15, 2015

Play a BB King song today & remember him! RIP Mr King & thanks for all the Great Music!!

When I heard B.B. King for the first time he was singing The Thrill Is Gone. The way he played & sang brought tears to my eyes. #RIPBBKing

RIP #BBKing… One of the true greats. pic.twitter.com/S4M7XsycLU

From the source. One of the originators. Fading breed. RIP #BBKing.