Cleveland’s Star 102.1 radio station has pulled holiday classic “Baby It’s Cold Outside” in support of the #MeToo movement. In his explanation of the decision, disc jockey Glenn Anderson called the lyrics to the song “manipulative and wrong.”

“We used to play the song ‘Baby It’s Cold Outside,’ but you’re the Christmas Executive Officer at Star 102 and you told us it’s no longer appropriate,” Anderson wrote earlier this week on the radio station’s website. “I gotta be honest, I didn’t understand why the lyrics were so bad…Until I read them.”

With that clever play on “CEO,” Anderson is referring to a poll the station put out to gauge listener feedback about the tune. However, at the time of our story’s publishing, the Facebook version of that poll was 95 percent in favor of playing the song. It is unclear how many of the current tally of 4,200 votes had come in after Anderson’s announcement about the decision was made on Tuesday:

Here is why we're not playing this Christmas song anymore. Did we make the right move?https://t.co/O1jFHm7vQx

Here is a screenshot of the current returns from the station’s Facebook poll, which says it is still open for four more days: 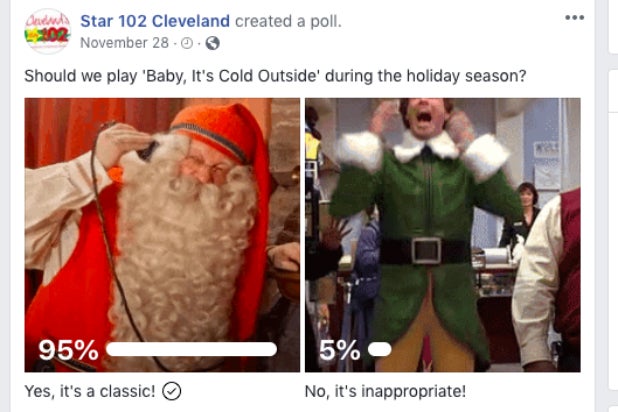 The Star 102 Cleveland Facebook page is also getting inundated with supporters of the song posting the song title and/or YouTube videos of the ditty in the comments section on anything — and we mean anything — the radio station posts.

For example, here is just a small snippet of the comments section on a post about concert tickers for a cappella group Straight No Chaser: 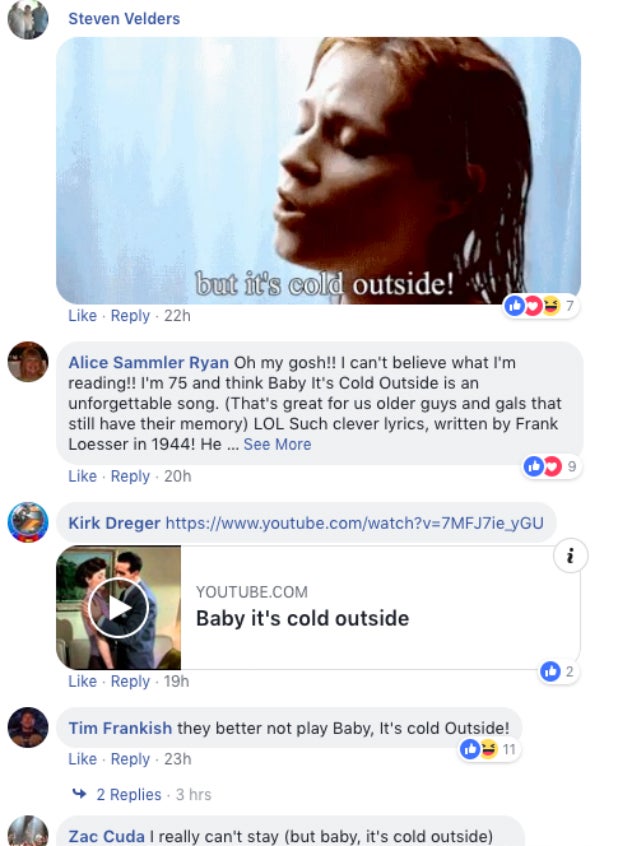 TheWrap reached out to Star 102 to ask if the decision to pull the song from rotation will be reconsidered based on the overwhelming support for the song on Facebook. We have not immediately heard back.

Back to Anderson’s Nov. 27 blog entry, the daytime-drive host then posted the lyrics to “Baby It’s Cold Outside,” in which a man tries to convince a woman to stay at his place against her better judgment. The male singer cites the bad weather as a good reason for his female date to stick around a little longer.

Below are those lyrics in full. They include lines like the man’s “What’s the sense in hurting my pride?” and the woman’s “Say, what’s in this drink?”

My mother will start to worry – Beautiful, what’s your hurry?
Father will be pacing the floor – Listen to the fireplace roar
So really I’d better scurry – Beautiful, please don’t hurry
Maybe just a half a drink more – Put some records on while I pour

The neighbors might think – Baby, it’s bad out there
Say, what’s in this drink? – No cabs to be had out there
I wish I knew how – Your eyes are like starlight now
To break this spell – I’ll take your hat, your hair looks swell

I ought to say no, no, no – Mind if I move in closer?
At least I’m gonna say that I tried – What’s the sense in hurting my pride?
I really can’t stay – Baby don’t hold out
Ah, but it’s cold outside

I’ve got to get home – Oh, baby, you’ll freeze out there
Say, lend me your coat – It’s up to your knees out there
You’ve really been grand – Thrill when you touch my hand
Why don’t you see – How can you do this thing to me?

There’s bound to be talk tomorrow – Think of my life long sorrow
At least there will be plenty implied – If you caught pneumonia and died
I really can’t stay – Get over that hold out
Ah, but it’s cold outside

“Now, I do realize that when the song was written in 1944, it was a different time, but now while reading it, it seems very manipulative and wrong,” Anderson concluded his explanation. “The world we live in is extra sensitive now, and people get easily offended, but in a world where #MeToo has finally given women the voice they deserve, the song has no place.”

“Baby It’s Cold Outside” first rose to prominence as a number in MGM’s 1949 musical “Neptune’s Daughter,” starring Esther Williams, Ricardo Montalban and Red Skelton. It has since been covered in countless movies and TV shows.