Last night’s episode of "The Bachelor" started off with the first one-on-one date going to my favorite tranny, Vienna.

I am really starting to dig this girl. On one hand she is tough as nails, yet her feelings get hurt when someone does not like her. She is young and trying to find her own path, so we need to cut her some slack. It’s so brave to go on a show like this pre-op. God bless her.

Jake takes Vienna on a helicopter ride and the destination is bungee jumping. He is on the bridge, ready to jump, gets scared, and says he is afraid of heights. Really? He’s a pilot. He can cruise at 35,000 feet but the top of a bridge freaks him out? I don’t want a pilot flying me to have this fear. I’m just saying.

They are about to jump, Jake is about to cry and back out, when Vienna kicks into protective mode. She is so supportive I just fell in love with her. She is cute and strong. I think there is hope for her. She is too young for him, but somehow I get it. I hope she can have her surgery completed before the wedding.

Jake is awkward with her and tells us there is good chemistry, but clarifies that it’s emotional chemistry. Their kisses are weird, but it’s almost charming. It allows them to build on something other than sexual chemistry, which is a good thing. When Vienna says she is on “cloud Jake,” it’s cute.

Vienna is back at the house and the claws in Crazytown are coming out. Ali, the Sleeping Beauty look-alike who was so sweet in the beginning, is now horrible. Really a bitchy, mean girl and I don’t like her. Is that harsh? No? OK, she is a skank and I don’t trust her.

Everyone is jealous of Vienna, but what is so strange is that they are are oddly supportive of each other. How is that possible? It’s a competition, people, and you should all hate each other, but you only hate her. Hands off my tranny friend. Vienna is telling them about her date, and it’s sweet, but they don’t get it. Crazytown is rapidly becoming Bitchville. 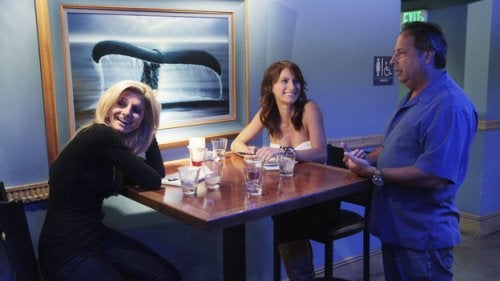 Now we are on a group date with Jon Lovitz (right) at his comedy club. Jake is back doing the thing where he talks like everything is his idea. Like Jon is his friend, and he arranged the whole thing.

t’s my biggest pet peeve about this show. It’s actually my only pet peeve. Jake has nothing to do with any of the planning. He met Jon at the same time as these chicks. He needs to stop.

They are going to do stand-up and Ashleigh (at left in photo) is crying because she is scared. First, if this chick is 25, then I am a natural blond and weigh 120 pounds. She is in her 30s and she is a freak, immature and pathetic.

Roz was an idiot to mess around with a staffer. She should have waited a week and had a shot at Jon Lovitz.

All the girls are doing a stand-up routine, and my eyes are bleeding, but I can’t stop watching. Ali refers to herself as “elementary,” which is the smartest thing she has said since we met her. Jessie is forgettable, Tenley puts her legs behind her head, Elizabeth goes blue, Kathryn steals a horrible kiss, Cory impersonates all the girls. And all the while Michelle is losing her mind.

Michelle (center in photo) talks about her first kiss. I imagine her head starting to spin around as she spews puke. She talks about how much she loves Jake. It is mortifying. I would watch surveillance tape of this chick in her padded room. She is creepy. Her stand-up is painful. I’m not a doctor, but this chick needs medical attention.

After the comedy club, the group date goes for a drink. Tenley pulls Jake aside and finally tells him she is divorced. She mentions her husband left her, she was a virgin when she got married, and has not been with anyone since. I kept waiting for her to recite Scripture and say how this was what Jesus wanted for her. She has got to go.

Ashleigh goes off with Jake and talks about how much everyone hates Vienna. She was petty and disgusting. Jake listened, but then said he felt bad because Vienna was not there to defend herself. It’s those types of things that make me love Jake.

Back at the house, Gia is lecturing Vienna about how horrible she is, and makes her cry. Poor thing. She is wearing no make-up, and looks like a little boy, which she is, and I feel sad for her. They are being mean, and calling her dangerous. It’s ridiculous. They hate her because she has balls. Literally and figuratively.

Mean girl Ali sits with Jake, and is worried because they have not seen each other since their date. She is a loser and I want her gone. She dumps all over Vienna, and that is all going to come back to hit her in the face. They are so sure Vienna will show her true colors, but in the meantime, they are all showing theirs.

Michelle is now cracking before our eyes. She is crying, talking about how she is looking for love, and no one else is on the same level. She is telling Jake how she really, really, really, really, really wants a husband. She asks for a kiss, then explains that it’s to see if she feels anything. He kisses her and it’s a disaster. By disaster, of course, I mean great television.

She then pulls the oldest and dumbest power play ever in the history of dating. She tells him she can’t stay, but will, if he wants her to. He tells her to go. BAM! Then she says she can’t believe he is doing this to her. Oh. My. God. I love this show. I am sad to see Crazy go. Her last words to us are, “I want to marry him, but he is not the man for me.” She is a bipolar mess.

Jake is talking to the group-date ladies. He is exhausted, emotionally drained, and has decided to go home and not give out a rose. I thought it was charming for a second, but then decided it was cowardly. He should have given the rose out, then left. They are all talking about how much integrity he has. No one is pissed they didn’t get the rose. I’m not buying it.

One-on-one date No. 2 goes to single mom Ella. They take off in a helicopter and Vienna is left at home with the madness. She apologizes to everyone if she has hurt any feelings. Ali jumps all over her again.

I need Ali to go home. She is Satan and karma is going to get her. Thank goodness when it happens, we will all be able to see it from the comfort of our couches.

Ella and Jake are at Sea World. He gives her a birthday present: a visit with her son, Ethan. The kid runs up to his mom and she doesn’t even cry. She hugs him, with one arm, and says, "What are you doing here?" It was the most unemotional reaction. It was as if they had been together at breakfast. I thought it was weird.

It got stranger when she watched Jake with Ethan. That is when she cried. Granted Jake was amazing with the boy. Really lovely and kind. As a single mother, it warmed my heart to see him with the child. But she only cried when she talked about what a great dad he would be. She was more emotional about finding a dad for her kid than about seeing her kid. I’m done with Ella.

We’re back in Crazytown and Elizabeth goes off for a chat with Jake. It is hard to tell who is crazier, Michelle or Elizabeth. These two chicks need to have their own show. Her “don’t kiss me approach” blows up in her face. Vienna comes over and interrupts their time. Elizabeth is pissed because she thinks Vienna ruined it, but it was already decided, sister. You are a loon. 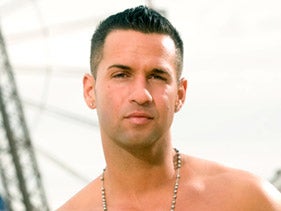 Elizabeth says, “I am not vanilla. I am all the colors of the rainbow”. Since when is vanilla a color in the rainbow? I am still laughing about that line. She is “not a fish in a pond waiting for a hook.” Really? Don’t fish avoid hooks in a pond? She may be the dumbest girl there. She flip-flops on everything she says and in the end she is out.

At the rose ceremony, Jessie has quite simply the ugliest hair on television. Elizabeth is gone, as is Valishia the “homemaker.” Valishia cries and says she is used to things not going her way and it is something she lives with every day. As she is crying, I want to slap her. We are down to nine.

The only thing that could possibly make this show any better is if The Situation from "Jersey Shore" is the next Bachelor. That would be the greatest casting in reality television history.