The trailer for “Back to the Future” doc “Back in Time” has the film’s current-day cast, crew and famous fans reminiscing about the movie that defined their shared past — and a generation.

For starters, star Michael J. Fox recalls a premiere event where Princess Diana was seated directly next to him: “I’m like a fake yawn and an arm-stretch away from being on a date with the princess of Wales,” he remembered.

Steven Spielberg called it the best time-travel movie ever, opining: “Lightning in a bottle tends to stick around for a long time.”

Later the executive produced offered up another soundbite: “The movie defines the taste of buttered popcorn.”

Also Read: 'Back to the Future' Documentary 'Back in Time' Acquired by Gravitas Ventures 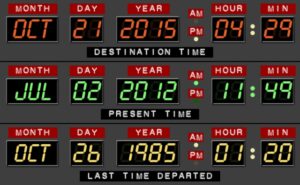