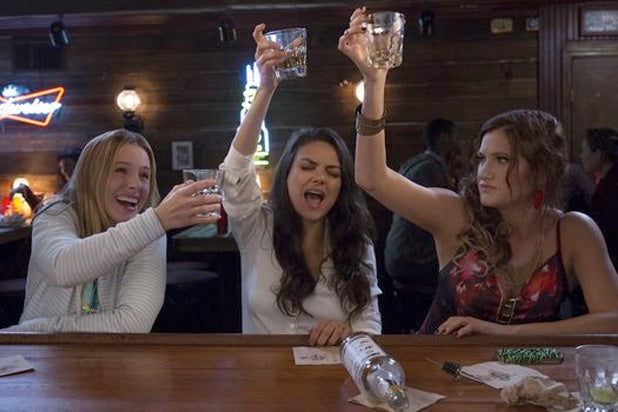 As “Bad Moms” rolls into theaters this weekend, it’s positioned to join a long line of female-centered comedies that came before it — ones that did bang up business at the box office in spite of mediocre to poor reviews.

STX’s R-rated movie, starring Mila Kunis, Kristen Bell and Kathryn Haan, started Thursday out with a 50-percent Rotten Tomatoes score and ended the day with a 62, just barely crossing the “fresh” barrier. With room still to nudge its score up further, it’s still safe to say a 90, or even 80, isn’t in the cards for this one.

Expected to open strong at the box office this weekend, “Bad Moms” is on a very similar path as films like 2014’s “The Other Woman,” 2013’s “The Heat” and 2014’s “Tammy” — all women-led comedies that proved to be essentially pan-proof, scoring stellar returns in the face of naysaying critics.

“The Other Woman,” starring Cameron Diaz and Leslie Mann, is a prime example. It scored an abysmal 24 percent on Rotten Tomatoes but went on to make nearly $200 million in global box office returns — more than four times its $40 million production budget.

Like the other comedies mentioned above, “Bad Moms” is tailor made for a girls night out, employing raunchy lines and Lucy Ricardo-esque physical comedy.

Also Read: The Evolution of Mila Kunis, From 'That '70s Show' to 'Bad Moms' (Photos)

But hey, neither was 2009’s “The Hangover” (probably), which scored a solid 79 on Rotten Tomatoes and went on to make $277.3 million domestically and $467.5 million worldwide. It was similarly budgeted to “The Other Woman,” at $35 million, and a little more than “Bad Moms,” which was made for less than $20 million.

And the testosterone-rich “This Is the End,” starring Seth Rogen and his usual cohorts,  was considered 83-percent fresh. Made for $32 million, it grossed more than $101.5 million domestically.

When similar, dare we say simplistic, comedies geared toward the guy set get stronger reviews, it made us wonder: Are women-led comedies not receiving a fair shake from reviewers?

Some explanation can be found in the recent confirmation of what many minority moviegoing audiences may have already known: That critics are mostly men, representing roughly 73 percent of jobs in the field.

One studio insider who spoke with TheWrap compared female led comedies to films geared toward black audiences, like Tyler Perry‘s “Madea” series and Eddie Murphy‘s “Nutty Professor” movies — which tend to get roundly lambasted by the critics, yet make a lot of money at the box office in spite of it.

Of course there are outliers in both categories: Like 2011’s women-led “Bridesmaids,” which received glowing reviews and even two Oscar nominations, and went on to gross nearly $170 million domestically. As for movies geared toward black audiences — or at least about black leading characters — there’s 2014 critical darling “Beyond the Lights” — though that was more of an indie darling, grossing $14.7 million off its $7 million production budget.

And on the other end of the spectrum, there’s 2015’s “Hot Pursuit,” which bombed all around. Starring Reese Witherspoon and Sofia Verga, it earned almost shockingly poor reviews (a mere 7 percent on the Tomatometer) and weak box office returns. In fact, it failed to even make back its $35 million production budget back in domestic grosses, which may have even put the title in the red.

It’s hard to definitively prove the hypothesis that female-led comedies get judged more harshly than similar male-geared films, argued Dr. Martha Lauzen, executive director of the Center for the Study of Women in Television and Film at San Diego State University.

“Overall, the research has found repeatedly that professional critics writing for top publications and other media outlets do not evaluate films with female protagonists more critically than films with male protagonists,” she told TheWrap.

Though, she admitted, “You could certainly build a case based on anecdotal evidence.”