Yesterday the trial of two Bahamians accused of attempting to extort $25 million from John Travolta ended in a shocking mistrial. Judge An

of a jury leak and forced her to terminate the proceedings. 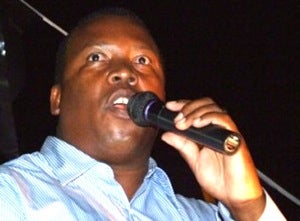 A paramedic, Tarino Lightbourn, and his lawyer, then-Bahamian Sen. Pleasant Bridgewater, were accused of threatening Travolta with going to the media with allegations the couple did not provide complete medical care for their 16-year-old autistic son, Jett, who died following a seizure last January.

During a televised gathering of the Progressive Liberal Party, to which Bridgewater belongs, Bahamian MP Picewell Forbes announced that  Bridgewater had been found innocent – even though jurors were still deliberating the evidence and had not reached verdicts.

"We have some good news,” Associated Press quotes Forbes as saying. “Pleasant Bridgewater is a free woman!"

It’s seems unlikely that the lawmaker, who has since been ordered to explain himself before a judge, acted in a moment of spontaneity and did not know what he was doing — or the consequences of passing on an unsubstantiated rumor.

According to his bio on the Progressive Liberal Party website, Forbes “has been a member of the broadcasting community for a number of years and has served in various capacities including Announcer, Deputy Director, Radio Programming & Production, Acting Assistant General Manager, Radio and most recently as Deputy General Manager, Radio Programming & Production.”

Despite his presumed knowledge of what is legally acceptable, Forbes seems to be a hothead who enjoys making incendiary statements for the sake of publicity.

On a site devoted to current events in the Bahamas, one reader comment was typical of the disapproval that has greeted Forbes’ clownish performances in parliament:

“It is surprising to see Picewell Forbes in the House acting so childish. It seems as if he lives for Wednesday to heckle speakers, carry on bad, and throw rude remarks. The thing that get’s me with Picewell is that he looks so angry all the time.”

A new trial is expected to go forward sometime in early 2010.