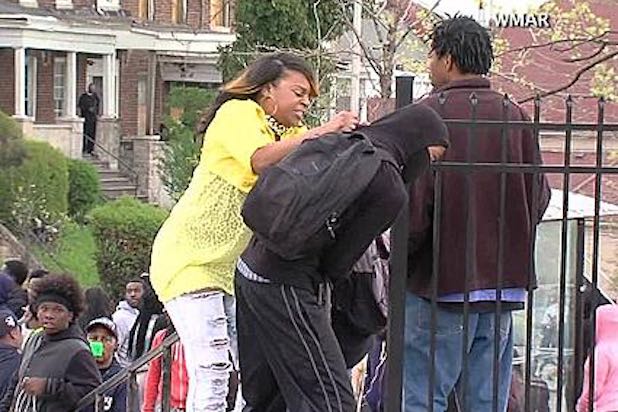 A Baltimore mother is being hailed on social media as “#momoftheyear” after a video in which she punishes her son for participating in the city’s violent rioting has gone viral.

Captured by a WMAR-TV photographer, the angry parent grabs her hooded son and slaps him around as she screams at him for reportedly throwing rocks at police.

Police commissioner Anthony Batts was impressed on Monday night, and told the press, “She started smacking him on the head because she was so embarrassed, and I wish I had more parents that took charge of their kids out there tonight.”

People taking 48 seconds out of their day to watch the spectacle seemed to approve, as well.

Go #momoftheyear #Baltimore The world needs more moms like you!!

#momoftheyear this is NOT child abuse but a mom doing a great fng job catching her son looting at #baltimoreriots http://t.co/ElScR1nzC9

Watch the raw footage below: