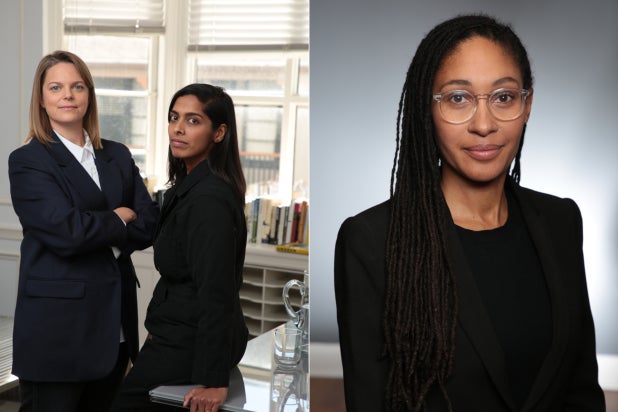 Former president and first lady Barack and Michelle Obama have set the executive team to run their newly-launched production company.

Priya Swaminathan, who came over as a producing partner last year, will serve as co-head of Higher Ground Productions with Tonia Davis. The two will be joined by Qadriyyah “Q” Shamsid-Deen, who will serve as a creative executive.

Higher Ground Productions has a multi-year deal with Netflix to create scripted and unscripted, docu-series, documentaries and features. The company, which signed the deal last March, expects to have an initial project lineup out soon.

“With Higher Ground Productions, we hope to bring people together around common values and uncommon stories–and Priya, Tonia and Q are precisely the people to bring that vision to life,” President Obama said. “They’re masterful storytellers. They’re veterans in the industry. And they not only bring their unique perspectives and life experiences to every project, but they’re committed to finding new voices who have their own stories to tell.  Michelle and I couldn’t be more excited about the team we’re assembling.”

Swaminathan most recently worked with Annapurna where she oversaw the studio’s film development slate, though her career is mostly in the documentary space. She has developed and produced fiction and documentary projects for a range of filmmakers, including award-winners Spike Jonze, Bennett Miller and George Clooney. In addition to producing Showtime’s “Very Young Girls,” Swaminathan has also produced documentaries for MTV and ESPN.

David comes over from Chernin Entertainment, where she oversaw development and shepherded productions for the company’s film and television projects. At Chernin, she served as an executive producer on the films “Snatched” and “The Greatest Showman.”

“Our goal isn’t just to make people think–we want to make people feel and reach outside of their comfort zone,” Michelle Obama said. “With their thoughtfulness, creativity and empathy, we know that Priya, Tonia and Q will find the common thread within every story to inspire us to be something more. I’m thrilled about this team as professionals–and as people. They’re wonderful.”