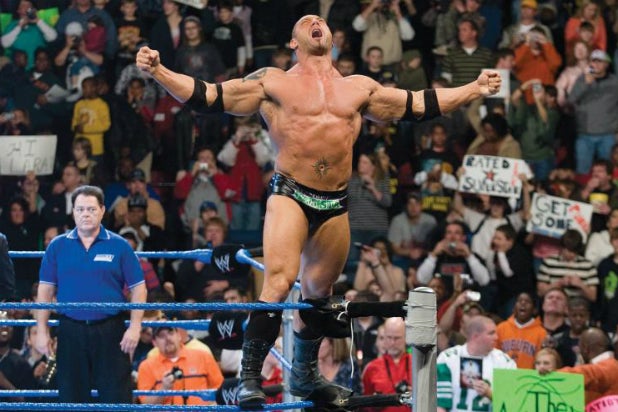 Batista — better known to movie fans as Dave Bautista — returned to WWE Sunday at WrestleMania 35, and was put through a particularly brutal match against Triple H.

Watch one of the better — or rougher — spots suffered during their No Holds Barred contest:

That back-breaking Powerbomb was not the only time the ring steps were used during the battle between the former Evolution teammates. The “Guardians of the Galaxy” actor did a little damage with the stairs of steel as well.

Things are about to get a LOT worse for @TripleH courtesy of @DaveBautista… #WrestleMania pic.twitter.com/sJOxeb3njs

Want some definitely not-PG violence? Earlier in the match, there was the below spot. We strongly recommend not watching the following video if you have a nose piercing.

There's nothing @TripleH won't do to save his career… and that includes RIPPING OUT @DaveBautista's nose ring!! #WrestleMania #NoHoldsBarred pic.twitter.com/0lyzWVulHF

Before Triple H went to the needle-nose pliers, he used a pair of channel locks on his foe’s fingers. Those weren’t the only items Paul Levesque picked up during an apparent Home Depot stop — chains, anyone?

Really, you haven’t turned away in horror yet? OK, back to the bumps:

BREAK IT DOWN.@TripleH just risked it ALL to turn the tide in this #NoHoldsBarred Match! #WrestleMania pic.twitter.com/CCVT1UaqKo

So, yeah, what we’re saying is, it was a rough match. With a little help from his friend Ric Flair — and of course a trusty sledgehammer — Triple H ended up with the win. With the “W,” the part-time wrestler and full-time WWE executive got to keep his in-ring career intact.