“Batman v Superman: Dawn of Justice” opened to big box office last weekend faces a steeper than usual drop-off in its second weekend following a pattern of recent blockbusters with bad reviews from both critics and audiences.

Usually, ticket sales drop an estimated 50 percent in their second weekend. However, analysts project a 60 percent to 65 percent drop off for Zack Snyder’s film despite the meager competition it faces in wide (or even semi-wide) release: The faith-based indie “God’s Not Dead 2” will open in 2,300 theaters, while Freestyle’s comedy “Meet the Blacks” will reach 1,000 screens.

“What we’re looking at is a massively front-loaded popcorn picture — one that will drop upwards of 60 percent in its second round,” Exhibitor Relations analyst Jeff Bock told TheWrap. “In other words: $63 million to $65 million next weekend.”

Still, “Batman v Superman” has managed to defy the odds. The movie, starring Ben Affleck as Batman and Henry Cavill as Superman, opened above projections at $166 million despite negative reviews from critics (29 percent on Rotten Tomatoes) and fans (a lackluster B from moviegoers surveyed by CinemaScore).

It joined a list of blockbusters that have succeeded despite negative buzz. “Twilight,” for example, had a Rotten Tomatoes score of 48 percent with a CinemaScore not recorded (at the time, the company didn’t collect scores for independent films), but still opened to $69.9 million.

However, “Twilight” had a drop off of 62.2 percent its second weekend. 2015’s “Fifty Shades of Grey,” which received an abysmal C+ on CinemaScore and 25 percent on Rotten Tomatoes but opened to $85.2 million, suffered a whopping 73.9 percent decline. 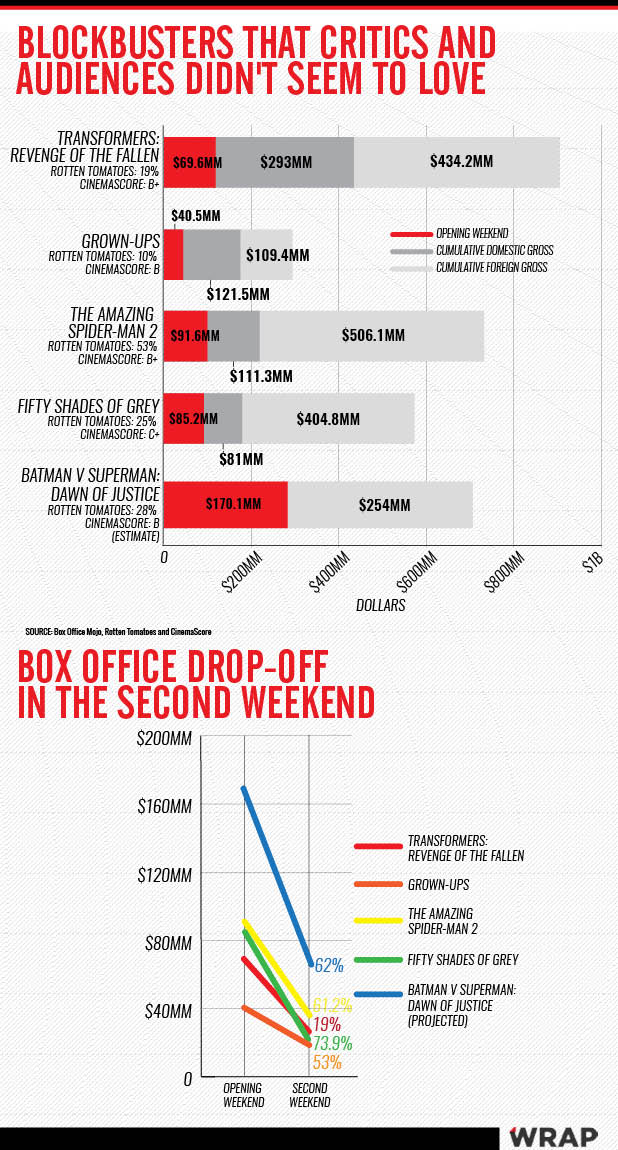 “Anytime a film has a huge hardcore fan base, but negative reviews and word-of-mouth, we see second weekend drop offs that literally fall off the cliff,” Bock said.

“Transformers: Revenge of the Fallen,” had a CinemaScore of B+ and a Rotten Tomatoes score of 19 percent, but still opened to $108.9 million. However, box office fell 61.2 in its second weekend.

“‘Transformers’ is the classic example,” said Paul Dergarabedian, senior analyst at comScore. “They are massive hits at the box office — ‘Age of Extinction’ was the biggest box office hit worldwide — and we call it a disconnect between the critics and the audience.”

“Twilight,” “Transformers” and “Batman v Superman” all had an existing fan base that evidently didn’t care what critics had to say about the films. However, the die-hard fans flocked to the theaters as soon as the films came out — resulting in the major drop off in the second weekend.

“Batman v Superman” should still be a slam dunk to hold the top spot at the weekend box office, though it faces a stiff challenge next week when it faces Melissa McCarthy’s new comedy “The Boss” on April 8. The comedic star’s last movie, “Spy,” opened at $29 million.