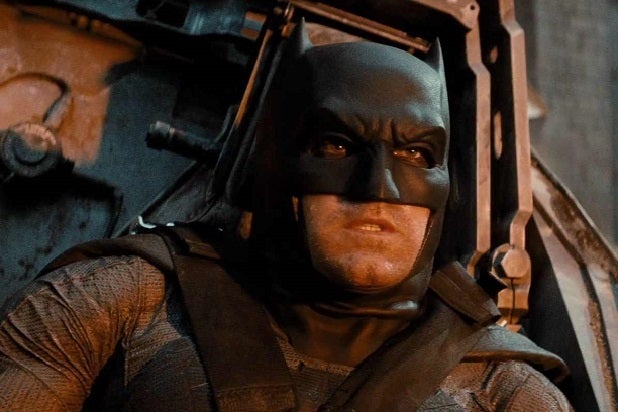 The nation’s No. 1 movie “Batman v Superman: Dawn of Justice” slowed down considerably as it began its second weekend at the U.S. box office, but still had plenty in the tank to cruise to another victory.

The DC Comics superhero epic starring Ben Affleck and Henry Cavill was tops and delivered $15,3 million from a market-high 4,256 theaters on Friday and is heading for more than $50 million over the three days for Warner Bros. The Friday number is off about 80 percent from its $81 million opening day in the U.S., but that included nearly $28 million in Thursday night previews.

The projected weekend figure would be a roughly 70 percent dropoff from its $166 million debut last weekend, which included Easter Sunday. Given its weak reviews (29 percent positive on Rotten Tomatoes) and so-so “B” CinemaScore, that’s about what can be expected. It’s in line with drop of the three “Twilight” movies, big openers with similarly soft notices. The last Superman movie “Man of Steel” fell 64 percent in its second weekend in 2013, and the last Batman film, “The Dark Knight Rises,” dropped 61 percent in 2012.

Warner Bros. executives won’t be fretting too much. Their Zack Snyder-directed blockbuster has already amassed $588 million globally, topping the entire runs of “Ant-Man,” “Thor” and “Captain America,” and delivered on goals the studio had in mind for the kickoff film in DC Comics Universe.

The PG-13-rated superhero saga added $19 million from overseas on Friday to lift its international total to $363 million. Its domestic total is nearly $225 million.

Disney Animation’s “Zootopia” will be a distant second with around $20 million in its fifth weekend after bringing in an estimated $5.6 million Friday, building domestic total to an impressive $261 million.

“God’s Not Dead 2” earned $2.9 million on its first day in release in 2,320 theaters and is looking at $8.4 million, a little under projections, over the three days for Pure Flix Entertainment. It received an “A” CinemaScore from first-night audiences.

The sequel to the 2014 indie hit is leading another faith-based film, Sony’s “Miracles From Heaven,” for fourth after the Jennifer Garner drama added another $2.1 million in on Friday which projects to a $7.5 million third weekend.

Both were running behind “My Big Fat Greek Wedding 2,” which will take third with around $11 million in its second weekend. The Nia Vardalos romantic comedy took in $2.8 million Friday for Universal.

“Meet the Blacks,” an R-rated comedy that is the weekend’s only other new wide release, was in ninth and should top $4 million over the three days for Freestyle Entertainment, after managing $1.4 million Friday from just 1,014 theaters.

Lionsgate dropped “Allegiant: The Divergent Series” more than 700 theaters in its third week and it managed $1.7 million from 3,018 locations. It will be sixth with around $5.6 million and has slogged to $56 million so far, and the third of four films in the franchise will be the lowest-grossing by far.

Some of the best celebrity pranks from April 1 and beyond

George Clooney is a top contender for Hollywood's prank king, getting into prank wars with other A-listers like Brad Pitt. Here's Clooney gets back at Jimmy Kimmel for pulling a prank on him and Hugh Laurie.
View In Gallery