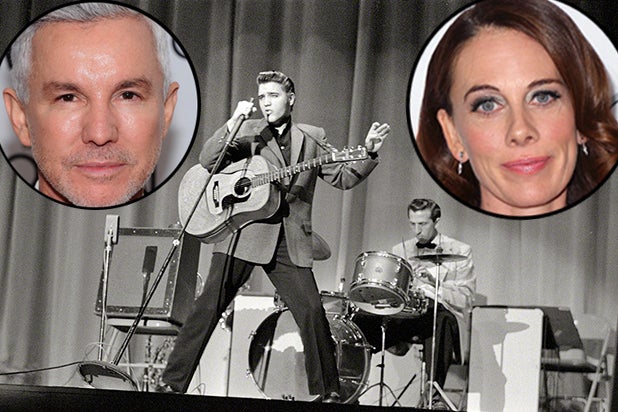 Ladies and gentlemen, Elvis is in the building — as in, the Warner Bros. building — and director Baz Luhrmann is in negotiations to join the iconic singer, who is the subject of an untitled biopic being written by Kelly Marcel (“Fifty Shades of Grey”), TheWrap has learned.

Marcel is hard at work writing an original screenplay about Elvis Presley, the hip-gyrating King of Rock and Roll, that will not be based on any pre-existing material. While the project is believed to be a biopic, it’s unclear which periods of Presley’s life would be depicted in the film.

Gail Berman is producing for Tecumseh Productions, while Andrew Mittman of Whalerock Industries will executive produce. WB executive Courtenay Valenti will oversee the project on behalf of the studio.

Warner Bros. has secured rights to all musical components in Presley’s catalog for this project, multiple individuals familiar with the situation told TheWrap.

Luhrmann has been in negotiations for several weeks and should his deal close, it’s expected that his wife, Oscar winner Catherine Martin, would board the project as costume designer and possibly as production designer as well.

Luhrmann has several projects in development around town — including Legendary’s “Kung Fu” movie — and it remains unclear which project will serve as Luhrmann’s follow-up to “The Great Gatsby,” which grossed $351 million worldwide. The film was Luhrmann’s biggest earner, and with such an impressive gross for a literary drama, it’s no wonder Warner Bros. is eager to get back in business with Luhrmann.

Luhrmann, who was nominated for an Oscar for producing his dazzling 2001 musical “Moulin Rouge,” is also developing a Napoleon miniseries for HBO. He’s repped by WME and Hirsch Wallerstein.

Marcel is the creator of “Terra Nova,” who earned high marks for her “Saving Mr. Banks” screenplay. Her work on the latter led to her being hired to adapt E. L. James’ bestselling novel, “Fifty Shades of Grey” — which hits theaters next Valentine’s Day.

She’s repped by WME and Casarotto Ramsay and Associates.

Berman and Mittman are developing a Jesse Owens movie as well as an adaptation of the bestselling book, “Men Are From Mars, Women Are From Venus.”