The Beatles’ 1967 “Sgt. Pepper’s Lonely Hearts Club Band” album artwork has been given a creative update by British art director Chris Barker, using it as a memorial for celebrities we’ve lost in 2016.

Among those who’ve been paid tribute are Prince, David Bowie, Glenn Frey, George Kennedy, Muhammad Ali and even Kenny Baker, who played R2-D2 in the “Star Wars” films. The artist’s latest addition was astronaut John Glenn, who passed away Thursday.

See who you can spot. 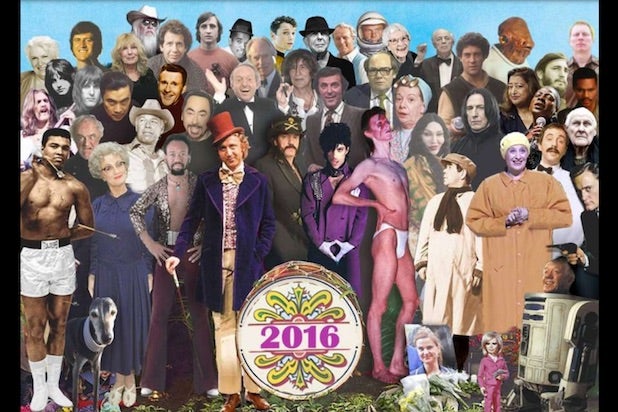 .@bluegrasshaze I did do a key, but it's hideously out of date now! #sgtpepper2016 pic.twitter.com/dxmFigXuC2

The original work (at the top) was designed by pop artists Peter Blake and Jann Haworth from an ink drawing by Paul McCartney, which consisted of 57 photographs and nine waxworks, including Marlon Brando and Marilyn Monroe.

Barker posted his experience on Tumblr, recalling how the idea came to him the night Donald Trump won the presidential election:

“There was a sense of anticipation in the air, something strange was starting to happen with the election,” he wrote.

“What a year, I was thinking, David Bowie, Brexit and now this. A lot of people speculate that Bowie was actually the glue that was holding the universe together. It’s certainly been a bit different since he tragically passed away. So I thought that since I was going to be up for hours anyway, and Mrs. Chris and the kids were fast asleep, I might do a montage that summed up how weird a year it’s been. It wasn’t going to be a montage of dead celebrities in the style of Sgt. Pepper’s at first. In fact the Sgt. Pepper element came quite late.”

Barker goes on to say: “The Sgt. Pepper parody is a bit of a designer cliché but as a fellow photoshopper once said to me, ‘it’s all about the source image.’ If you choose Warhol, Lichtenstein, Leibovitz or Peter Blake people respond to it instinctively. So what the heck I thought, I’m going to be up anyway. Let’s do it. Three hours later I put it on Twitter and b3ta and thought little more of it.”