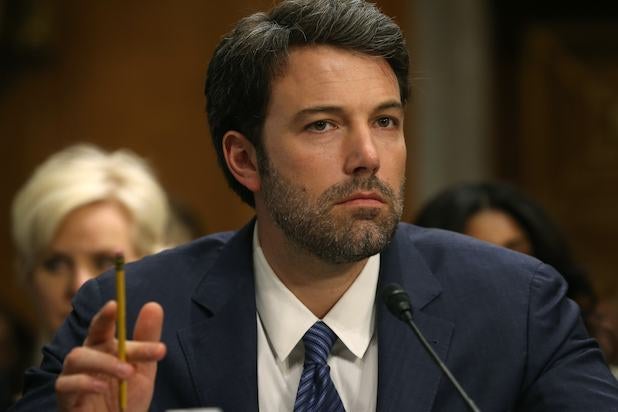 The Writers Guild of America, West has named Ben Affleck 2015 recipient of the Valentine Davies Award.

The two-time Oscar winner is receiving the annual prize on Saturday, Feb. 14 in Los Angeles at the WGAW’s 2015 Writers Guild Awards, in recognition of his humanitarian efforts and service to the global community.

Affleck is currently starring in David Fincher‘s “Gone Girl,” but he’s equally renowned for his filmmaking contributions off screen. He co-wrote “Good Will Hunting” with Matt Damon, which won them a screenwriting Oscar in 1998, and directed, starred in and produced “Argo,” which was named Best Picture in 2013.

See Photos: Ben Affleck Is Batman: 16 Actors Who Played the Dark Knight Before Him

However, the WGAW is honoring him for contributions that have little to do with Hollywood. Affleck notably founded the Eastern Congo Initiative, even testifying before the U.S. Congress on multiple occasions as an expert witness on the turmoil in the Central African country. The ECI is responsible for 80 grants to create and support economic and social development opportunities in the region, according to the WGAW.

“Ben Affleck needs no introduction here. Yet this Oscar-winning screenwriter — twice nominated for Writers Guild Awards — and much-lauded actor/director/producer has somehow found the time to become an engaged leader in humanitarian causes here and abroad,” Chris Keyser, WGAW President said in a statement. “Perhaps most crucially, Affleck founded the Eastern Congo Initiative, a grant-making and advocacy group that works toward an eastern Congo with opportunities for economic and social development and the flourishing of a robust civil society.

“Affleck has traveled extensively in support of these initiatives with energy, commitment, intelligence, and effectiveness, devoting large amounts of time and presence. And in doing so, he has raised the bar for what it means, in this community, to be a socially committed citizen,” he continued.

The WGAW’s Valentine Davies Award, named after the man who wrote “Miracle on 34th Street,” honors Guild members whose humanitarian efforts and service are said to have brought dignity and honor to writers across the globe. Past recipients include “All in the Family” executive producer Norman Lear, “Dick Van Dyke Show” creator Carl Reiner, “Erin Brokovich” screenwriter Susannah Grant and, most recently, “House of Cards” executive proucer Sam Simon.

The WGAW’s 2015 Writers Guild Awards West Coast ceremony will be held on Saturday, Feb. 14, at the Hyatt Regency Century Plaza in Los Angeles.