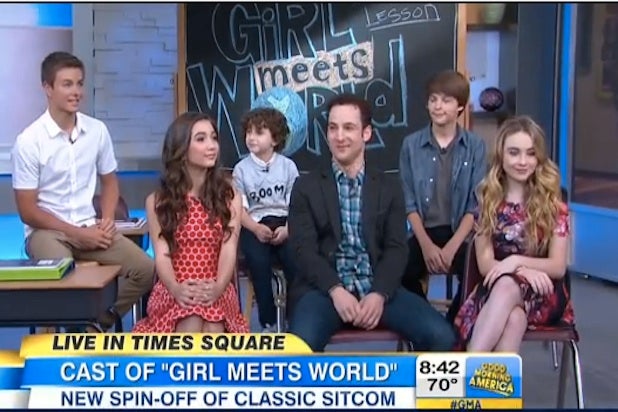 Ben Savage promised fans of “Boy Meets World” that the Disney Channel spinoff, the aptly titled “Girl Meets World,” will be just as great as the original.

“What do you want fans of the classic 90s show to get from this new version?” Spencer asked him.

“Well, a lot of the fans who watched ‘Boy Meets World,’ they kind of grew up with us and they’re very protective of the show,” Savage said. “And they’re nervous about this new show. And they want to make sure it sticks to the legacy and has the same tone and tenor as ‘Boy Meets World’ and I want them to know that it does, and we just finished our first season and we’re really, really happy.”

“You felt comfortable to be back?” Spencer asked.

“It does. It’s a little different because my character, now, Cory, I’m a dad with two kids, and I don’t have kids in real life,” Savage said. “So it’s been a nice learning experience. And we’re having a great time and we hired a really wonderful cast and I think America is going to like them.”

Rowan Blanchard — who plays daughter and star Riley Matthews —  revealed she was born after the show went off the air but was able to watch all the old episodes in preparation for her role.

“We’re starting the show over with a whole new generation of fans,” Savage said.