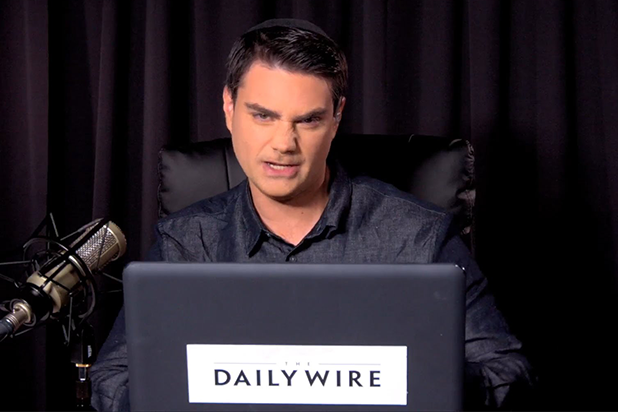 Ben Shapiro doesn’t know if there’s tape of President Donald Trump saying the N-word, but if there is, he said that the president would lose his support.

In a series of tweets Tuesday, the Daily Wire editor-in-chief said if a tape existed, he would support a primary challenger against Trump in 2020.

“If the tape exists, would you support a primary challenge to Trump.” a Twitter user asked.

Shapiro was immediately challenged by fellow conservative John McCormack, a senior writer for the Weekly Standard.

“What if there were a tape in which Trump bragged about grabbing women by the genitals,” he shot back at Shapiro, which prompted a swift explanation.

“I didn’t vote for Trump last time, as you know, and ripped him ceaselessly for that,” Shapiro said. “But even the awfulness of that tape isn’t comparable to using the n-word. It just isn’t.”

I didn't vote for Trump last time, as you know, and ripped him ceaselessly for that. But even the awfulness of that tape isn't comparable to using the n-word. It just isn't.

Shapiro later elaborated even further after facing criticism from both sides.

“So here’s the deal. Yes, saying the n-word is worse than the genitals tape, and his Charlottesville comments (both of which were disgusting). Also, I think it would generally be a tactical mistake to primary Trump, since the party would then rally against conservatives,” he said.

“There comes a point when the downside of a primary run (namely, the massive backlash against conservatives that would follow) is dramatically outweighed by the downside of another Trump top-of-the-ticket run. An n-word tape would shift that math.”

Rumors of Trump using the N-word in an old tape or recording garnered public attention again this week after former presidential aide Omarosa Manigault Newman said that she had heard the tape. Manigault Newman has been promoting her new book, “Unhinged,” and has released secretly recorded tapes she made during her time in the White House, including one that showed various White House aides discussing how to spin a potential N-word tape.

Also Read: The Verge Co-Founder Calls Ben Shapiro 'The Jew Who Helps Other Jews Onto the Train'

On Wednesday, White House press secretary Sarah Sanders said she “can’t guarantee” that such a tape doesn’t exist. Trump himself has flatly denied the charge.

Shapiro, a former editor at Breitbart, had been one of Trump’s toughest critics during the primaries, but largely came around when he became president. He is on record saying that he would be inclined to support the president in 2020. Shapiro, who the New York Times famously called the “cool kid’s philosopher,” has seen his star rise in recent years, though he still remains a lightning rod for controversy.

“I’m really sorry,” Duplass wrote. “I now understand that I need to be more diligent and careful. I’m working on that. I want to be clear that I in no way endorse hatred, racism homophobia, xenophobia or any such form of intolerance.”