Ann Coulter’s scheduled speech at Berkeley for tonight was canceled earlier this week, but that didn’t stop hundreds of protesters from flooding the University of California campus.

The demonstrators came ready for action — and possible violence — earlier in the afternoon wearing helmets, shields and padding, according to the Washington Post.

The authorities also turned out in force, resulting in both conservative and liberal activists mostly just shouting at each other across the street, divided by a police line.

However, by midway through the evening, only two people had been arrested in connection with the demonstrations — one for carrying a knife on campus and another for obstructing a police officer, wearing a mask to evade police and other charges. 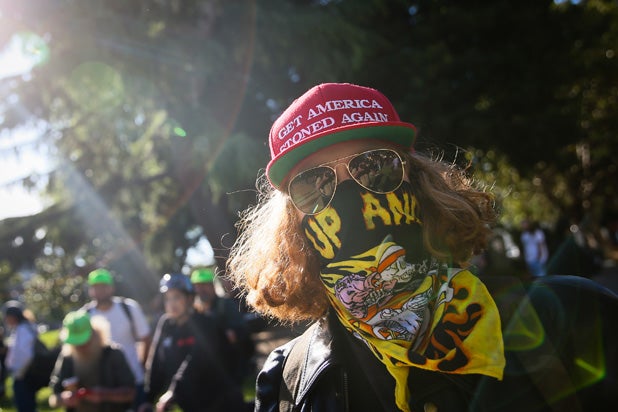 Coulter, who initially insisted she would go to Berkeley even after the university canceled her planned speech citing threats of violence, told the New York Times on Wednesday: “It’s a sad day for free speech.”

After arriving in San Francisco, the conservative commentator had hinted that she might still “swing by to say hello” to her supporters in Berkeley — but apparently held back.

She later told Fox News’ Tucker Carlson on Thursday night that she hadn’t planned to say anything inflammatory anyway.

“Well, my seditious and hateful speech, the theme of it, obviously, it was going to be a searingly brilliant speech on immigration,” Coulter said.