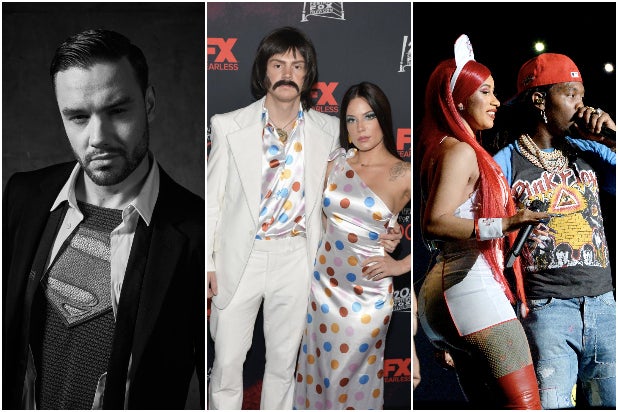 Celebrities got in on some of the trendy pop culture Halloween costume ideas of 2019 and did so with style, giving their takes on the untethered from “Us,” Pennywise the Clown from “It Chapter 2,” the Genie from “Aladdin” and even dressing up as one of the year’s other breakout stars, Billie Eilish.

And with Halloween falling during the middle of the week this year, take a look below at how Hollywood got creative with their costumes a bit early.

Kevin Hart went throwback and dressed as his buddy Dwayne Johnson back when he was young, still had a full head of curly hair and thought it was cool to rock chains and fanny packs.

“Birds of Prey” comes out next year Nicki!

Jessica Biel dressed up as her husband Justin Timberlake from his ’90s N’SYNC days, admitting that this is the price she had to pay for going on Jimmy Fallon and admitting that she didn’t know any of his old songs — despite being married to him. And she brought JT along for the ride as a big microphone while she was at it.

This is what happens when you admit on TV that you don’t know any NSYNC songs and you’re married to @justintimberlake. Well played, husband, well played.

What, like it’s hard? Kim Kardashian West didn’t just dress up as Reese Witherspoon’s character from “Legally Blonde,” she did a shot for shot remake of the sequence in the film in which Elle Woods sends in a video essay to Harvard Law. The studio behind the film, MGM, even proposed that the next line of Yeezy clothes should all be in pink in honor of the video.

Ciara and Russell Wilson as The Carters

Ciara and Seattle Seahawks QB Russell Wilson went “Ape$#!%” this Halloween and dressed up as Beyoncé and Jay-Z, recreating the music video from the duo’s recent collaborative album.

From the Wilsons to the Carters to the Obamas… Much Love & Respect. We goin Ape $#!% #HappyHalloween

Kate Beckinsale snapped this shot with her friend Jonathan Voluck inside a grocery store, with her dressed as “Breakfast at Tiffany’s” era Audrey Hepburn, and he dressed as Elton John in his rhinestoned Dodger Stadium jersey as seen in “Rocketman.”

Gabrielle Union as Isis from “Bring It On”

Gabrielle Union went throwback for her Halloween costume dressing herself and her daughter as her old cheerleader character from the movie “Bring It On.”

Supermodel Ashley Graham didn’t let being pregnant stop her from having some fun, dressing up as the sultry “Who Framed Roger Rabbit” cartoon character.

Demi Lovato took advantage of the midweek Halloween and dressed up twice, going from “Let them eat cake” to “You’ll float too.”

Halsey as Marilyn Manson and Cher

The pop singer Halsey emulated two of her musical idols on two completely different ends of the spectrum. In one costume, she put on a whole lot of leather and eyeliner and posed with an Insane Clown Posse juggalo as Marilyn Manson, and she also showed up on the red carpet with Evan Peters as Sonny and Cher.

While others might’ve tried imitating Brad Pitt from Quentin Tarantino’s “Once Upon a Time in Hollywood,” Liz Hurley threw it back to Uma Thurman and dressed in bright yellow as the samurai sword-wielding assassin The Bride from the “Kill Bill.”

Tracee Ellis Ross as Red (“Us”)

Someone get Jordan Peele on the phone. Tracee Ellis Ross pulled off a perfect look as the untethered family from this year’s “Us,” even dressing up her whole family and mimicking Lupita Nyong’o’s creepy, distorted speech.

Hi @lupitanyongo it’s me again. Another year, another costume. It’s the @blackishabc this Tuesday at 9:30pm/8:30c! #blackish #halloween

DeAndre Hopkins as the Genie (“Aladdin”)

Houston Texans athlete DeAndre Hopkins took the cue from Will Smith and dressed as the Genie from the live-action remake of “Aladdin.” Fantasy football players are wishing to this genie for some more touchdowns.

The band of sisters HAIM donned some mop-top wigs and even teased a new song that’s in the vein of the ’90s band of brothers Hanson this Halloween.

“DUH,” Nina Dobrev wrote on Instagram as she dressed up as a spitting image of this year’s biggest new pop star Billie Eilish, complete with the green streak of hair and all.

Patrick Schwarzenegger and Abbie Champion as Austin Powers and a Fembot

Arnie’s son did his best Mike Myers impression and dressed as the International Man of Mystery this Halloween.

A post shared by Patrick Schwarzenegger (@patrickschwarzenegger) on Oct 26, 2019 at 12:11pm PDT

“Do you respect wood? I revere wood,” skateboarder Tony Hawk wrote quoting “Curb Your Enthusiasm” after he dressed up as none other than Larry David this Halloween and even performed a trick, an image I don’t think we’ll ever get the real Larry David to attempt.

Tom Brady as a Stormtrooper

The Patriots QB said he’s listed as a “Did Not Practice” on Thursday after getting into costume. It honestly would surprise no one if TB12 showed up as a cameo in “Star Wars: The Rise of Skywalker.”

Rose McGowan paid tribute to “one of the greatest women ever” in recreating an image from a classic psychological horror film, “Rosemary’s Baby.”

my Halloween costume is an homage to one if the greatest women ever @miafarrow pic.twitter.com/pWNtDSLUE9

Cardi B as a Nurse

Cardi B didn’t just dress as a nurse for Halloween but wore her outfit on stage at a recent show.