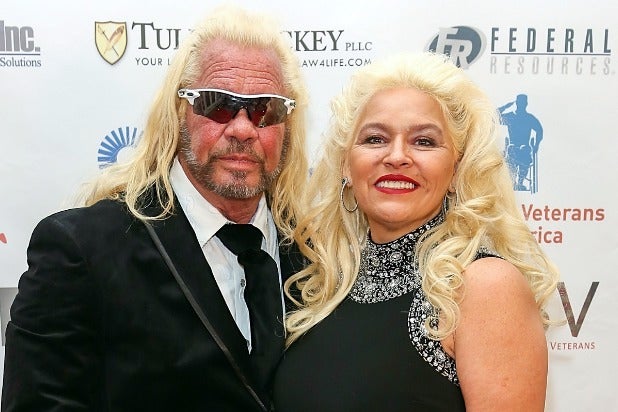 Duane “Dog the Bounty Hunter” Chapman’s wife, Beth Chapman, died on Wednesday morning after suffering from throat and lung cancer. She was 51.

Chapman confirmed the news of his wife’s death in a tweet, writing, “It’s 5:32 in Hawaii, this is the time she would wake up to go hike Koko Head mountain. Only today, she hiked the stairway to heaven. We all love you, Beth. See you on the other side.”

On June 22, Chapman’s family released a statement to Hawaii News Now saying that she had been admitted to the ICU at the Queen’s Medical Center in Honolulu, where she was placed in a medically-induced coma.

“Please say your prayers for Beth right now thank you love you,” Duane asked his Twitter followers the following morning.

Duane posted two more updates on Twitter prior to his wife’s passing–one was a photo of her sparkly, rhinestoned acrylic fingernails, the other was to tell fans to be wary of any premature or inaccurate reports about Chapman’s condition. 90% of what you’re hearing is fake news.

“I don’t mean to be nasty but some are filling in the blanks. @wgnamerica will be releasing an accurate update soon. Please keep prayers coming!” Duane wrote.

Beth announced she was diagnosed with Stage 2 throat cancer in September 2017, but just two months later during a two-hour A&E special “Dog & Beth: Fight of Their Lives,” Dog received a call from a pathologist saying his wife was cancer-free. In November 2018, she underwent emergency surgery to remove a blockage in her throat, at which time it was discovered that the cancer had spread to her lungs.

Born Alice Elizabeth “Beth” Smith in Denver, Colorado on October 29, 1967, she and Dog met in 1986 when she was 19. Their on-again, off-again romance continued for the 10 years that followed, with them each marrying others during that time.

In 1995, she and Chapman’s relationship took both a personal and professional turn when they moved in together and joined forces in business. She became the youngest licensed bail bondsman in Colorado’s history (at 29) and ran their bail bonds office while Dog went bounty hunting. They married in 2006.

“We are deeply saddened by the tragic news that Beth Chapman lost her battle with cancer today. She was an exceptional woman, fiercely loyal and passionate about her family and she was a true joy to work with,” WGN America said in a statement. “All of us at WGN America will miss her tremendously. Our thoughts and prayers are with Duane, her family, loved ones and millions of fans.”

Beth Chapman is survived by her husband, sons Dominic and Garry, and daughters Cecily and Bonnie.