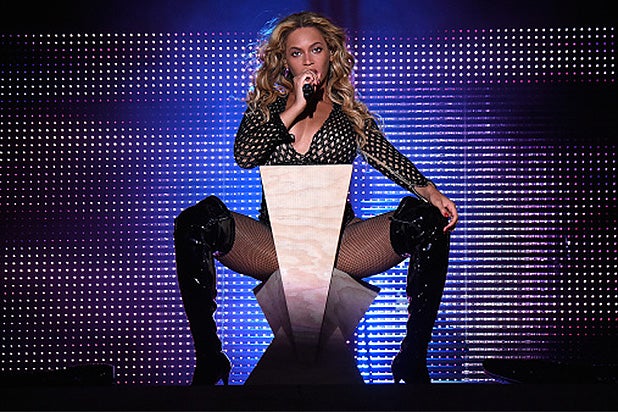 What’s in a name? A lot of legal trouble — at least, if you try to jack Beyonce’s moniker to flog your merchandise.

The singer/cultural phenomenon has filed a lawsuit against a company selling products branded with the word “Feyonce,” claiming that the products infringe on her trademark.

The suit, filed Tuesday in federal court in New York, takes issue with a line of clothing bearing the phrase “Feyonce.”

The company selling the products, Feyonce Inc., also offers a mug with the phrase “He put a ring on it,” a play on the lyrics to Beyonce’s hit “Single Ladies.”

The suit claims that the Feyonce brand “is nearly identical to Plaintiffs’ famous Beyonce trademark.

“Despite letters from Plaintiffs to Defendants demanding that they cease and desist from selling their infringing activities, Defendants continue to sell unauthorized products and to trade upon the goodwill associated with Plaintiffs, all for Defendants’ profit,” the lawsuit reads.

Feyonce has not yet responded to TheWrap’s request for comment.

As the complaint points out, Beyonce owns numerous trademark registrations for her mark, including for “entertainment services, clothing, mobile digital electronic devices, fragrances and makeup.”

The suit claims that the alleged infringing products are “causing irreparable harm” to the singer.

Alleging trademark infringement, unfair competition and other claims, the suit is seeking to shut down the Feyonce line. Beyonce also wants unspecified damages.