Who runs the World? Beyoncé!

The “Love on Top” singer brought the crowd to its feet Saturday night at the Budweiser Made in America music festival in Philadelphia.

She strutted on stage in a “Bootylicious” bejeweled bodysuit, then changed into several other racy ensembles including a red corset from Agent Provocateur and a long sleeve jacket on top, between belting out her hits including “Run the World (Girls),” “7/11,” “Ring the Alarm,” “Halo,” and “Drunk In Love.”

The singer also gave a shout-out to Destiny’s Child, the group that made her famous, asking, “Where my survivors at?” before performing “Survivor,” in the concert that ran live on Jay Z’s music streaming service Tidal.

She made sure to acknowledge former group members Kelly Rowland and Michelle Williams too, saying “Shout-out to my girl Kelly, I love you. My girl Michelle, I love you.” 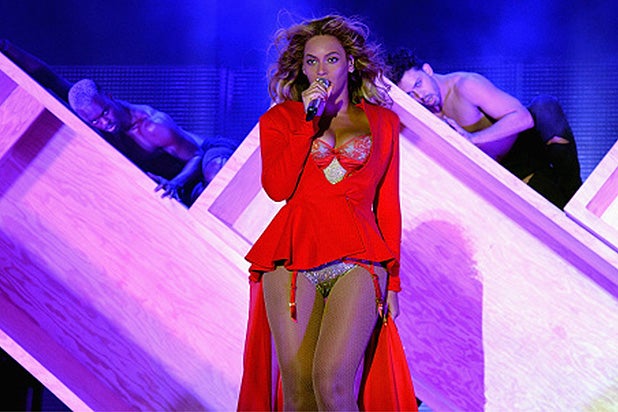 Beyoncé went on to offer words of encouragement to the crowd and talked about female empowerment. Her carefully choreographed set included a background dancer moving to the words of Maya Angelou‘s classic “Phenomenal Woman” between songs.

“I have this one term for the kind of woman that my mother raised me to not be. I call it a ‘do nothing b–ch’,” Rousey said. “The kind of chick that just tries to be pretty and be taken care of by someone else. That’s why I think it’s hilarious if my body looks masculine or something like that. Listen, just because my body was developed for a purpose other than fu–ing millionaires doesn’t mean it’s masculine,” Rousey said in the clip that has gotten millions of views on YouTube.

Watch a snippet below of Beyoncé performing “Single Ladies (Put a Ring on It).”