Facebook mentions of “Beyonce” spiked over 1,300 percent in the hours after the album dropped, the social media site told TheWrap.

Not only did users “Like” and tweet (which we will get to below), they also bought. Beyonce’s album is currently both No. 1 and No. 2 on iTunes, with the clean version trailing the explicit one. According to Billboard, the self-titled album, which was released around 9 p.m. PT, sold 80,000 copies by midnight.

That means Beyonce is gunning for Garth Brooks, whose “Blame It All On My Roots: Five Decades Of Influences,” which was No. 1 this week, is projected to sell another 150,000 to 160,000 copies of his box set. It’s too early to call, of course, but it seems very likely that Beyonce will unseat Brooks with just a few days worth of sales. (The fiscal week closes on Sunday night.)

Also read: Beyonce’s Secret Album Shoots to No. 1 on iTunes

Twitter moved the news instantaneously as it does best. According to Topsy, there have been nearly 1.5 million tweets over the past day. And the spike, as you could imagine, is quite dramatic — especially considered a day ago the singer pulled in about 66,000.

Here is the pattern of tweet activity related to “Beyonce” over the past month: 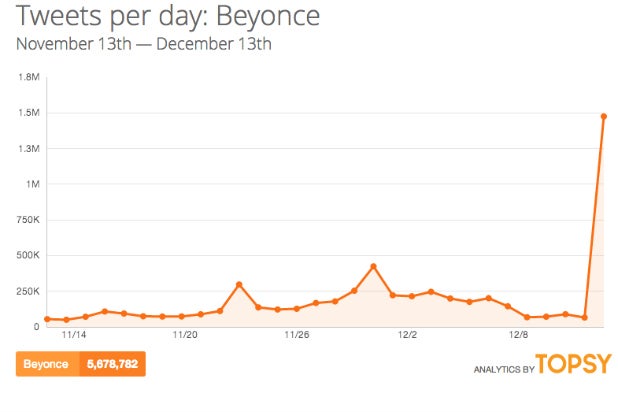