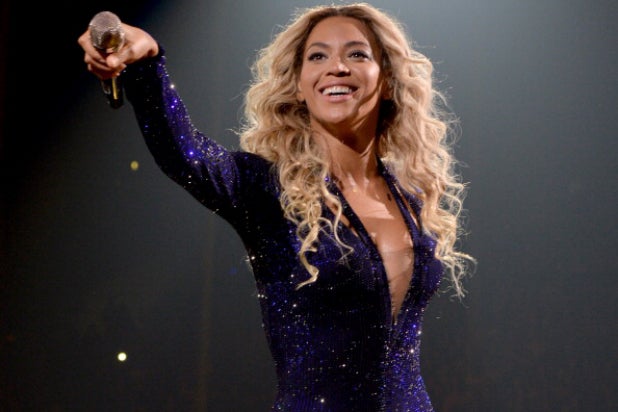 Much like “Beyonce,” the digital version of “Red” was exclusively sold through iTunes for its first week. It became available to all digital retailers after its first week on sale. Physical versions of “Beyonce” will ship in time for Christmas, and on Thursday, iTunes users will be able to purchase individual songs and videos from the hot album.

Beyonce’s newest offering was released at midnight ET Friday with essentially no announcement, save a press release, which came at roughly the same time that the Apple music-sharing app listed it for sale at $15.99. The bold non-marketing marketing ploy has surely paid off in both internet buzz and strong sales, with “Beyonce” essentially guaranteed to be a runaway No. 1 on Billboard’s Top 200 chart in just half-a-week’s time.

Industry analysts estimate that the closest competition when the charts are revealed Tuesday night or Wednesday morning will be Garth Brooks’ box set “Blame it All on My Roots” — last week’s No. 1. For this week, insiders are predicting 150,000 to 160,000 additional sales for the country legend. Brooks’ eight-disc compilation sells exclusively at Walmart.

The iTunes launch for “Beyonce” is also the second-largest digital sales week overall, counting all digital retailers. Tops is Lady Gaga’s “Born This Way,” which sold 662,000 downloads in its first week (a full one), thanks in part to Amazon MP3 selling the record for just 99-cents during its debut. Billboard estimates that Amazon MP3’s 99-cent version resulted in 440,000 copies sold.

Previously, expectations were that a new Beyonce album would come out in 2014, and the presumption — if there was one — was that it would be a more traditional project with a typical release. But what happened instead was a tremendously successful approach that could revolutionize the future of the industry. And with Lady Gaga and Britney Spears flopping recently, change is good.