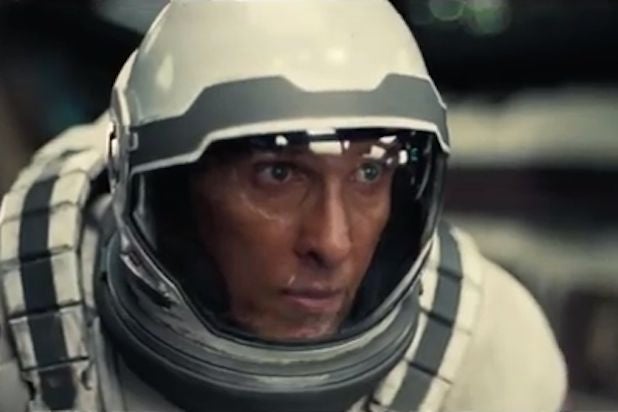 “Interstellar” is aiming for the stars this weekend, the film took in $3.5 million at the Thursday box office.

The Chris Nolan mind-bender took in $2.7 million in Friday pre-shows and $800,000 from 249 film and IMAX locations. The film already brought in $4.85 million since debuting in limited release on Tuesday and is now playing at 3,561 locations.

Disney’s PG-rated “Big Hero 6” raked in $1.4 million at the box office on Thursday night. By comparison, the animated “The Lego Movie” brought in $400,000 at preview showings earlier this year.

“Big Hero 6” is expected to edge out Paramount’s “Interstellar” over the weekend, according to industry analysts. Projections for the animated tale of a prodigy and his robot pal Baymax will likely hit $65 million over the three days. Analysts expect Nolan’s PG-13 space drama “Interstellar” to land in the $55 million-$60 million range. The studios are projecting lower totals.

Both films should have some longevity in theaters. There are only five more wide releases this month and both movies have a very good shot at hitting $200 million domestically and bringing in a solid haul internationally. Warner Bros. is distributing “Interstellar” outside the U.S.

“Interstellar” brought in an estimated $1.5 million from special IMAX and 70mm and 35mm film screenings Tuesday night and Wednesday.

“Big Hero Six” follows robotics prodigy Hiro Hamada, who with his closest companion — a robot named Baymax – and a reluctant team of first-time crime fighters, battles to save the high-tech city of San Fransokyo.