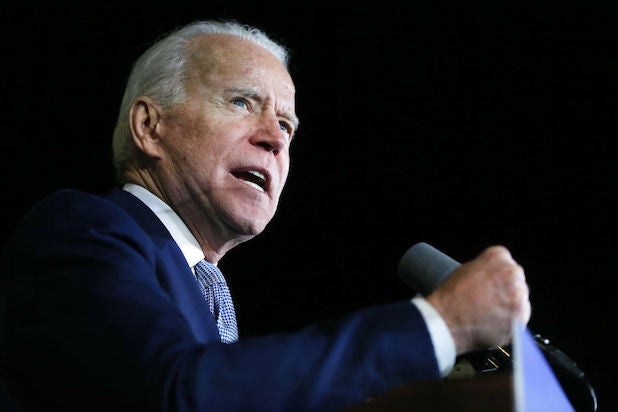 Big-ticket Hollywood donors are throwing their weight behind former vice president Joe Biden since his big win on Super Tuesday, according to Hollywood fundraisers who spoke with TheWrap. But based on the latest election finance data, Hollywood’s candidate of choice – who’s still in the running – is Biden’s main competitor: Bernie Sanders.

Sanders, whose Super Tuesday victory in California helped narrow the gap between him and Biden, has drawn significant financial support from donors in the entertainment industry. Based on Federal Elections Commissions data released on Feb. 21 that was analyzed by Open Secrets, Sanders came in second in January fund-raising with $1.41 million in donations from the entertainment industry.

Pete Buttigieg, who dropped out of the race on Sunday and endorsed Biden, topped the list with  $1.46 million in donations.

Biden, meanwhile, ranked behind Elizabeth Warren with $879,378 in donations.

But the race for the Democratic Party nomination has significantly changed in just the past two weeks. Biden’s campaign got a boost after his victory in South Carolina, and Monday endorsements from Buttigieg, Amy Klobuchar and Beto O’Rourke helped the former vice president emerge as a strong contender going into Super Tuesday. And when the polls closed on Tuesday, Biden maintained that momentum, clinching victories in at least nine states, as well as a Wednesday morning endorsement from Mike Bloomberg, who dropped out of the race and vowed to support Biden.

“We’re seeing organizers come out, we’re seeing energy,” Eric Ortner, a member of Biden’s finance committee and a former member of the Obama administration, told TheWrap ahead of Super Tuesday. “We haven’t had scale [before]. You’re seeing scale now — the number of people, the amount of resources deployed, this is no longer a question of viability. This is proof of viability.”
Wednesday evening, Biden is scheduled to appear at a reception at the home of Sherry Lansing, the former CEO of Paramount Pictures. In a show of support from fellow Democrats, Sen. Dianne Feinstein, L.A. Mayor Eric Garcetti are co-hosting the event along with producer Jamie Patricof and activist Kelly Patricof,  former ambassador to Germany John Emerson, among others.

The shift comes after months in which many Hollywood donors spread their donations among multiple candidates or held back on donating at all until a front-runner emerged. For example, Hollywood mogul and Quibi co-founder Jeffrey Katzenberg has hosted fundraisers for Biden, but has also donated to Elizabeth Warren, Kamala Harris, Klobuchar, Buttigieg,  O’Rourke, Michael Bennet and John Hickenlooper in this presidential primary cycle, according to FEC filings.

Jordan Brown, another Hollywood networker and fundraiser, told The Guardian that he was relieved the party was coalescing around Biden, even if he wasn’t necessarily the most enthusiastic about the candidate.

“I don’t think that there’s anyone who would argue that a Biden presidency will be transformative,” Brown, who has appeared in the past at fundraisers for former candidates like Pete Buttigieg and Kamala Harris, said. “I don’t think even he is arguing that. Trumpism is strong and embedded, and I think the pendulum swing of another ideologue is more than the country can handle.”

Other Hollywood donors who have been waiting may well be ready to finally back Biden. Mega-donor Haim Saban has yet to pronounce his support and was asked on Tuesday night whether he was ready to back Biden.