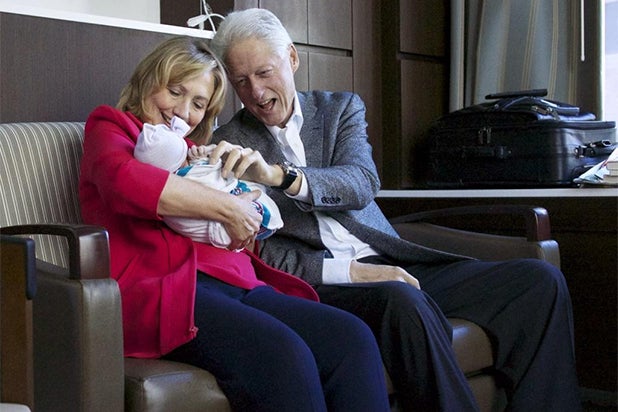 The Clinton dynasty has welcomed a new heir, and the former First family was more than happy to take to social media to share the first glimpse of Charlotte Clinton Mezvinsky.

Chelsea Clinton, daughter of Bill and Hillary Clinton, gave birth to her first child with husband Marc Mezvinskyon Friday. “At 7:03 PM on September 26th, we finally met Charlotte,” she tweeted, along with the first photo of the happy parents with their new daughter. “We’re in love.”

Former President Clinton also gave the world a glimpse of his first granddaughter, seen in the arms of her grandmother Hillary.

“Charlotte, your grandmother @HillaryClinton and I couldn’t be happier!” the former President tweeted on Saturday.

In August, Chelsea Clinton left her post as an NBC Special Correspondent to focus on the Clinton Foundation and welcoming her first child. All these new change in the Clintons’ lives come as the focus on the 2016 increasingly focuses on whether Hillary will decide to run. She’s said she will make her decision around the new year.