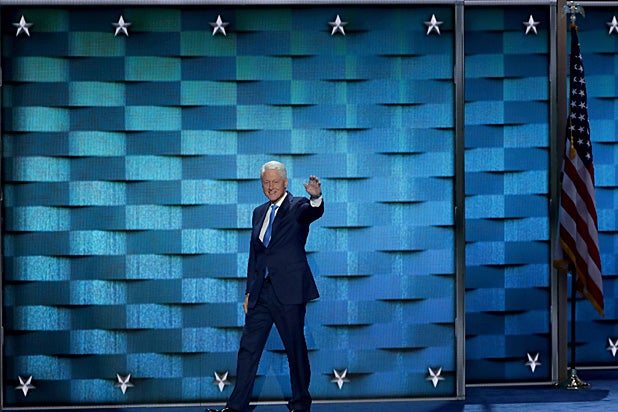 Bill Clinton has a lot of experience making speeches, but the one he delivered Tuesday night in honor of his wife at the Democratic National Convention may be his best yet.

The former president stole the show on the second night of the Philadelphia event with a personal narrative that touched on the moment he met Hillary in 1971, their dating life and the time he watched all of the “Police Academy” movies with daughter Chelsea.

Captain America himself, Chris Evans, tweeted, “Bill Clinton might be the coolest human on the planet.”

Also Read: Bill Clinton on How He Met His Wife: 'I'm Hillary Rodham. Who Are You?'

Meanwhile, Shonda Rhimes quoted his memorable line about Hillary making history: “You nominated the real one.”

Along with the former POTUS, Hollywood stars including Meryl Streep, Lena Dunham, America Ferrera and Alicia Keys took to the stage Tuesday night to pledge their support to the first woman to win the Democratic presidential nomination.

“We just put the biggest crack in that glass ceiling yet,” Hillary said when she eventually spoke via satellite from New York.

See the tweets praising Bill below.

Bill Clinton might be the coolest human on the planet.

"You nominated the real one." @billclinton telling us the difference between #DemsInPhilly and Republican candidate.

Bill been the man. And when you the man your man thang ain't no slouch, she's running for commander and chief. She's molded for this

This is masterful storytelling by @billclinton. He is offering a side of @hillaryclinton rarely discussed.

As a parent, just watching @ChelseaClinton while her father @billclinton speaks is touching and inspirational.

.@billclinton: "Hillary's done a pretty fine job of being a mother." #DemsInPhilly #DemConvention

that's right @billclinton Our men and women in the armed forces are heroes!!! #DemsInPhilly

Damn @billclinton you R an outstanding speaker.. Your stories, never boring, always specific. I loved U As president.Crikey.Glad I voted 4 u