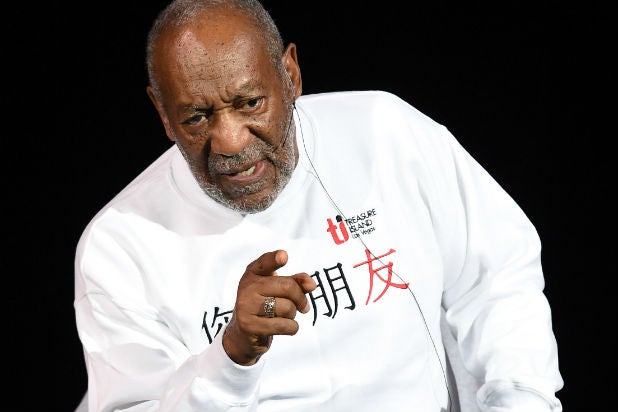 Yet another Bill Cosby show has been interrupted by yet another heckler.

The latest confrontation happened Friday night, during the comedian’s standup show in Baltimore at The Lyric Opera House.

Minutes after Cosby started his set, a man yelled, “38 women spoke up and called you a rapist.”

In a video posted online by the Baltimore City Paper, several fans can be heard telling the man to “shut up!” But he seems unfazed and shouts, “Tell the one about how to get away with rape.”

Cosby briefly interrupted the show telling fans: “Just remain calm,” before adding, “We are here to enjoy my gift. We are not here to argue. Let those people speak. We will find them and ask them to leave.”

The heckler was eventually removed by security.

But the situation was just as contentious outside the arena as a small crowd of protesters chanted “Your fame won’t shame anymore!”

“The Cosby Show” star has been publicly accused of raping, drugging, coercing or sexually assaulting more than 30 different women since 1965, many of whom have only started to come forward in recent months.

While the TV legend hasn’t been charged with any crimes stemming from the allegations, two more women came forward Friday to accuse him of sexual assault.

In the wake of the accusations, Cosby has suffered a series of career setbacks, with Netflix postponing a comedy special that was to have aired late last year, and NBC shelving a comedy that it was developing as a possible starring vehicle for Cosby. Some of his standup shows have also been canceled.