Image this: FedEx knocks on your door to deliver a gi-normous box and, when you open it, you realize it’s filled with presents from one of the richest men in the world, Bill Gates.

While that would certainly be a Christmas miracle for some, it was one of many surprises doled out courtesy of Reddit Secret Santa 2016. More than 119,000 individuals participated in the giant online gift exchange, which connects internet stranger-friends around the world.

Reddit user Aerrix couldn’t believe her eyes when she opened the box and saw the photo and notes from Gates, which read: “I can’t believe your Secret Santa left you hanging last year. To ensure you don’t lose faith in the Reddit community, I’ve enclosed several gifts that I hope you will enjoy. There are a few video games to play, some things to keep you warm and three of my favorite movies for you to watch over the holidays. I’ve also made a donation in your name to code.org, to help give more students the chance to learn computer science. — With best wishes from Seattle, Bill Gates.”

No doubt, Aerrix’s reaction was… well, read it for yourself:

“I get the box open and there’s just bubble wrap EVERYWHERE, but under the first layer I see a picture…and my jaw. Just. Drops. I will let the picture speak for itself! I immediately call my husband at work, I normally text him first to make sure it’s ok if I call but I couldn’t wait…he answered and I spoke very quietly because I knew if I didn’t I would just yell, and I said something like “dear, please tell me you can talk right now,” and he sounded worried and he’s like “yes? What’s going on?” And I said BILL GATES IS MY FREAKIN SANTA!!!!!!!!”

Yes, Gates made up for last year’s faux pas. Boy, did he ever. Read on:

“I got everything out and laid it out all nice, and there was glitter EVERYWHERE. I just had to go for the two unwrapped boxes that said “Aerrix’s Mittens” and “Clairrix’s Mittens” first. My dog’s name is Claire, btw, how freakin CUTE IS THAT?! He got me ZELDA MITTENS and you guys, matching ones for my DOWG!

Next I open the three boxes stacked together, and it’s three special edition wireless XBOX one controllers! I was confused, but only for a moment, because then I noticed the specific SIZE of the big box to my left….I knew what it was, I KNEW WHAT IT WAS. It was an XBOX ONE MINECRAFT EDITION!!!!!!!!! There was also a handwritten note from him that says “I love my XBOX and thought you might like one too.” Well yes, yes I would! And I do! I’m just flipping out at this moment (so is my mom on the phone, I’m sending her all these pics AS I’m taking them).” 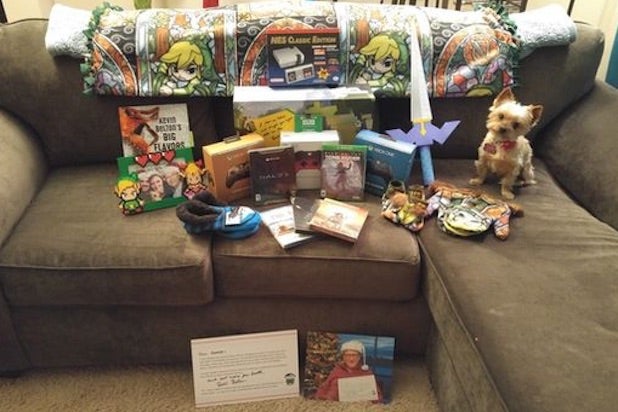 Also in the mix, slippers, a Cajun cookbook, a paper version of the final form Master Sword from Skyward Sword, movies and Xbox games, making Aerrix one very happy — and very grateful — lady.

“I staged my haul all pretty like, put the dog in the pic, and took the best Secret Santa pic there ever was. You guys, I am just, SPEECHLESS! I know I said that like twice before, then wrote this giant wall…but like, I work overnights and normally go to bed around 9:30am and it’s 11:14 now and I just can’t bring myself to do it! I want to look at my pretty Zelda things and hook up my new consoles and PLAY VIDEO GAMES! GAH! I will force myself to go to bed and then play video games when I wake up.

Merry Christmas to all yall out there, and to Mr. Gates, who has the biggest heart and REALLY KNOWS HOW TO TREAT A GIRL TO SOME VIDEO GAMES (and video game paraphernalia)! I’m just blown away by his generosity, which went even further than all these gifts because he submitted a donation to code.org in my name to give more students the chance to learn computer science, which is AWESOME because it’s something near and dear to my heart as my husband is a programmer and my brother has a degree in computer science!

Check out Reddit Gifts to join in their future exchanging events.