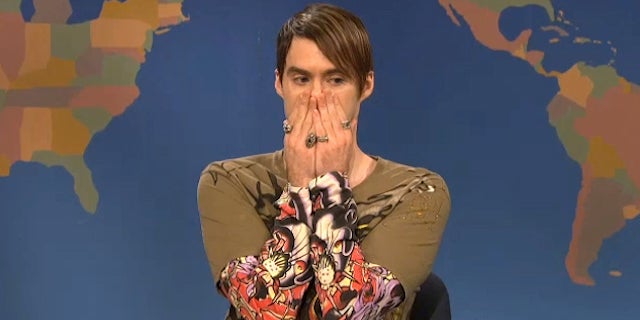 Bill Hader may have given up his job on “Saturday Night Live,” but one of his most famous characters, Stefon, may return.

While appearing on Hulu series “Larry King Now,” the comedian said the gay night club enthusiast “possibly will” come back to NBC’s long-running sketch show, or maybe make appearances outside of the series, as well.

But don’t expect a movie.

When King brought up the idea of a Stefon sitcom, Hader laughed and appeared very open to the idea.

“A sitcom? I haven’t heard that one,” Hader said. “People always talk about a movie. A Stefon sitcom would actually be pretty great.”

Both Hader and “SNL” writer Mulaney, the co-creator of the character, have been very hesitant about a Stefon movie in the past.

Last May, Hader told GQ that the character has “no emotional through line,” which would be essential for a feature-length adaptation.

Watch Hader talk Stefon in the two videos, below: