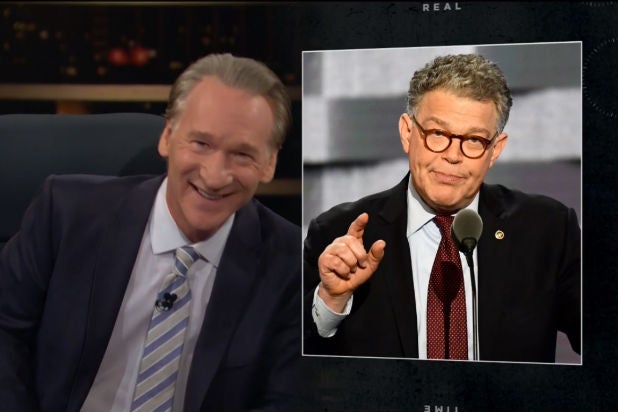 On Friday, Bill Maher called for the return of Al Franken, and questioned the credibility of the women who accused the former senator of sexual harassment.

“Women should be heard and we should always keep in mind the vast majority of women reporting serious abuse are truthful. But women also didn’t completely lose the ability to lie in in 2017,” Maher said.

The comments came on HBO’s “Real Time,” during Maher’s “New Rules” segment. Maher said Donald Trump’s “kryptonite” is “being made fun of.”

“We need someone who can shred Trump like a stand up takes down a heckler. Because Trump is a heckler. And to fight him, we need a comedian,” Maher said. “It would be a great idea if Al Franken got back in the game.”

In November 2017, eight women accused Franken of various acts of sexual harassment from both before and after he was elected to the U.S. Senate. This prompted several members of the Democratic senatorial delegation to call on him to step down. Franken announced on Dec. 7 that he would resign, and did so Jan. 2, though he has consistently denied the accusations of wrongdoing.

About those accusations, Maher said, “You know what? America always overreacts and then has buyer’s remorse. We did it with 9/11, and Janet Jackson’s nipple, and bird flu, and Bill Clinton’s blow job. And certainly, the all-time overreaction was ‘Al Franken: sex predator.'”

Maher then recounted how the accusations began with radio host Leeann Tweeden, who performed at several USO shows with Franken and said that in 2006 Franken forcibly kissed her during a rehearsal. This was followed by the release of a photograph in which Franken appeared to grope Tweeden while she was sleeping.

“It’s a joke, he apologized for it, no one died,” Maher said about the photo.

“What’s been forgotten is that while Al was always careful to say women should be heard, he never said, ‘Yeah, I did it,'” Maher continued.

Maher then suggested that Tweeden may have accused Franken for political reasons: “Now, Leeann Tweeden is a favorite guest of Sean Hannity, and a Donald Trump Jr. Twitter pal. And somehow Roger Stone knew ‘It’s Al Franken’s time in the barrel’ before she made her allegations public.”

Also Read: Bill Maher Digs in on Recession 'Wish': 'A Recession Is a Survivable Event,' Trump 'Is Not'

“I believe Al,” Maher continued. “I believe that’s still my right as an American to say. Women should be heard and we should always keep in mind the vast majority of women reporting serious abuse are truthful. But women also didn’t completely lose the ability to lie in in 2017.”

This got a very muted response from the audience, and panel guest Michelle Goldberg interjected: “I have to say for the record, there was a lot of ass grabbing too.”

“I’m going to get to that, and it quite isn’t your place, sorry,” Maher replied. “I mean, you have the whole show and I have this little time at the end.”

Maher turned next to the seven other women, who he said had accused Franken of “mostly hand-drifting while taking pictures. Does it matter that at least two of these are ridiculous?”

“Again, our president now is Joan Crawford. Are Democrats really going to permanently send away one of of our ablest warriors for being a waist-grabber?”

“We can have #MeToo and Al Franken. They’re not mutually exclusive. It’s time to get Al off the bench so he can come back to doing what he does better than any other Democrat, taking down right-wing blowhards. I want to see Al Franken debate Donald Trump, and you know what? So do you,” Maher concluded.