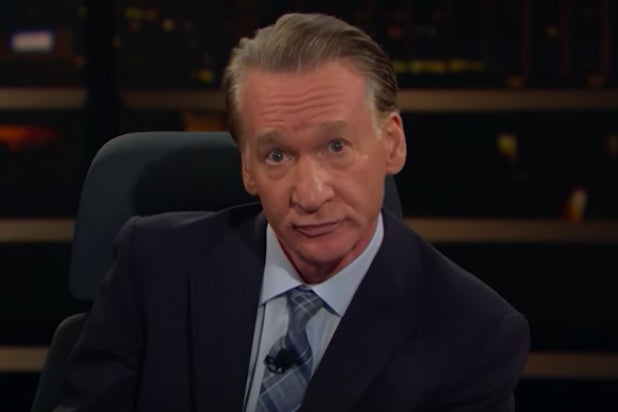 Bill Maher has been accused of making a racist joke after he referred to Popeyes Chicken during an interview with Texas Republican Congressman Will Hurd on Friday’s episode of his HBO show “Real Time With Bill Maher.”

“I was in the CIA for almost a decade,” Hurd said during the segment at the top of the show. “I was the dude in the back alley’s at four o’clock in the morning collecting intelligence on threats to the homeland.”

“That’s where they collect them huh? By the Popeyes Chicken,” Maher told Hurd, who is black.

The comment followed a fried chicken joke Maher made during his opening monologue: “Besides the lies and the crazy [President Donald Trump] is just aggressively stupid. It’s black history month, so he went into the Rose Garden and pardoned a bucket of chicken.”

Daily Beast writer Marlow Stern called Maher out shortly after the episode aired, comparing the joke to the 2017 incident in which Maher apologized after he used the n-word during an exchange with Republican senator Ben Sasse. Other critics called for a guest boycott of the show.

“At this point people have to start declining invitations to go on @RealTimeHBO,” said New Yorker writer Jelani Cobb.”I’ve been on previously. No way I would again.”

Conservative critics also called Maher out as an example of perceived hypocrisy on the left. “Bill Maher insults black CIA vet by suggesting he picked up tips “behind the Popeye’s Chicken” same day as Ralph Northam admits he submitted racist af blackface Klan photo to yearbook,” said Federalist publisher Ben Domenech. “It’s almost like this is all a game to them.”

HBO, Bill Maher, and Rep. Hurd did not immediately respond to requests for comment from TheWrap.

Video: Here's Bill Maher lobbing a clearly racist joke to GOP Congressman Will Hurd, asking him if he gathered undercover intel for the CIA out "by the Popeye's Chicken." pic.twitter.com/gxwNZQKyAL

Ayo, for real. Fuck @billmaher. Will Hurd is a better man than me, 'cause if dude had belittled my years in the CIA by making a Popeye's Chicken joke, he woulda got slapped.

Steve King has been using his official government website to promote a white nationalist blog.