Bill Maher plugged Melania Trump’s “First Lady Faces Her Critics: My Side of the Story” US Weekly cover on Friday night’s “Real Time” but noted that they left out his favorite feature, “25 Things You Didn’t Know About Me,” with the FLOTUS.

Although the First Lady’s cover story is the real deal and US Weekly does have a recurring feature by that name, Maher had a little fun at her expense, making up a list of “25 Things” as if she had shared them with the magazine.

“In Slovenia, I was a catalog model, which is what you call a model you order out of the catalog,” said Maher, as if reading her words from the story.

Here is Maher’s entire made-up list for the FLOTUS:

1. In Slovenia, I was a catalog model, which is what you call a model you order out of the catalog.

2. I’m the only First Lady to ever wear sunglasses to a hurricane.

3. I can crush walnuts with my cheekbones.

4. I have no first language.

5. I spent two years in a vault at Deutsche Bank when Donald defaulted on a loan.

6. In order to speed things up, I let him call me Ivanka.

7. I hope I inspire little girls everywhere to marry for money.

8. As a model, I threw up after meals. Now I just throw up after sex.

9. The first thing that attracted me to Donald was the bulge in his pants. His wallet.

10. I once played Scrabble against Eric and the final score was 3 to 2.

11. Every time I look at my husband I’m reminded of the Slovenian national dish, a fat greasy sausage filled with cheese.

12. Every year I send a thank-you note to the family of the man who invented golf.

13. The biggest thing I miss about New York is being hundreds of miles away from my husband.

14. I once caught Mike Pence trying on my stilettos.

15. I feel I share a bond with the thousands of American women who have also slapped Donald’s hand away.

16. I don’t mind visiting poor people, but poor and wet people is a bit much.

Also Read: Bill Maher's Advice to America When Trump Leaves Office: Get Everything in Writing (Video)

17. My Secret Service code name is “That Poor, Poor Woman.”

19. Growing up in Slovenia, I had a pet cat named “Delicious.”

20. I’ve always been attracted to rich, powerful, older men who eat Kentucky Fried Chicken that might bring on an early death.

21. Sometimes when I bounce light off my diamond, Donald’s hair will chase it like a cat.

23. I wish I knew why I was having a recurring dream I’m pinned beneath a giant orange sack of s—.

24. Economically, I Hope Every Last Person can Make Enough money.

25. If I could tell my younger self just one thing it would be this: if you catch a leprechaun and he gives you a wish, be more specific. 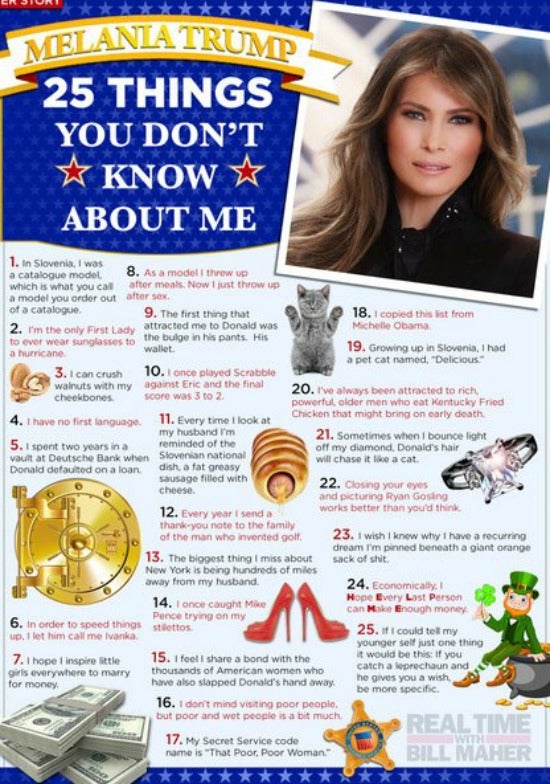