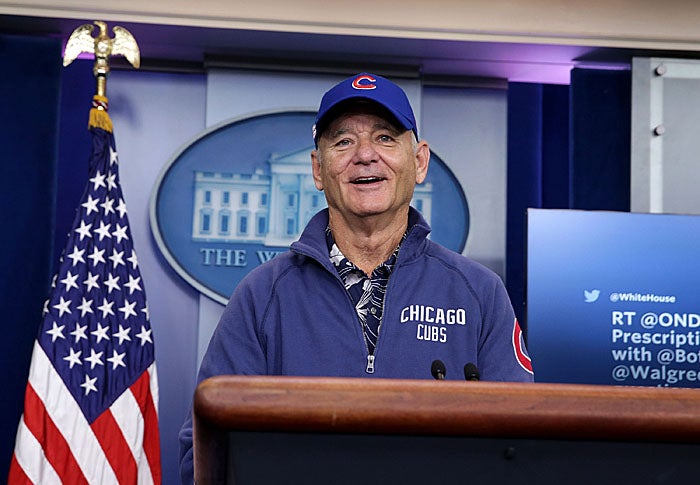 Looks like Bill Murray will have to TiVo his own PBS special.

“Saturday Night Live” alum Murray’s ceremony at the Kennedy Center, where he received the Mark Twain Prize for American Humor, is scheduled to air Friday on PBS, but he won’t be home to watch it. Instead, Murray will be at Wrigley Field, performing at Game 3 of the World Series.

Murray, an ardent Chicago Cubs fan, will be on hand to sing “Take Me Out to the Ball Game” during the seventh inning stretch, the Chicago Tribune reports. (That is, assuming Tom Hanks doesn’t show up instead.)

Hopefully, Murray will belt out the baseball chestnut in his Nick the Lounge Singer persona…

Murray, a Chicago-area native, recently took over a White House press briefing to show support for his beloved Cubs, jumping onstage to discuss the team’s chances of making it to the World Series.

“I feel very confident that [Los Angeles Dodger] Clayton Kershaw is a great, great pitcher,” Murray said, as the Cubs faced off against the Dodgers in the National League Championship Series. “But we got too many sticks. And at home, our crowd, the weather? You get a little bit of autumn in Chicago. You don’t get that in Los Angeles. Trees just die in Los Angeles.”

Former Cubs public-address announcer Wayne Messmer will sing “God Bless America” before the game, Fall Out Boy frontman Patrick Stump will belt out the national anthem, while Dante “The Don” Deiana will man the DJ booth throughout the World Series games at Wrigley Field.

Game 3 of the World Series airs tonight on Fox at 8 p.m. ET.