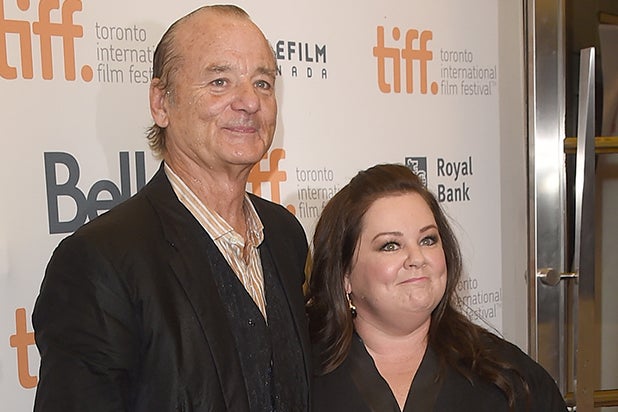 Not everyone was on board when a potential female-led “Ghostbusters” reboot was announced, but Bill Murray is fully supportive of handing the reigns over to some funny ladies.

“I’m fine with it,” Murray told the Toronto Star when asked about the potential reboot. “I would go to that movie, and they’d probably have better outfits, too.”

Murray, who played Ghostbuster Dr. Peter Venkman in the original 1980s franchise alongside Dan Aykroyd, Ernie Hudson and Harold Ramis, also had some casting suggestions to offer up for the modern remake.

Murray seems to be on the right track, since Paul Feig, who directed McCarthy and Wiig in “Bridesmaids,” is behind the new “Ghostbusters.”

“I like this girl Linda Cardellini a lot,” Murray continued. “And Emma Stone is funny. There are some funny girls out there.”

For McCarthy’s part, she remains noncommittal, though open to the idea. “Oh, my God, that’s daunting,” she answered the Star when prompted about starring in the potential film with the aforementioned ladies. “That’s taking on a legend, a legendary movie. But I would do anything with those ladies, anything at all.”

For fans of the original “Ghostbusters,” it’s currently back on the big screen in celebration of its 30th anniversary.