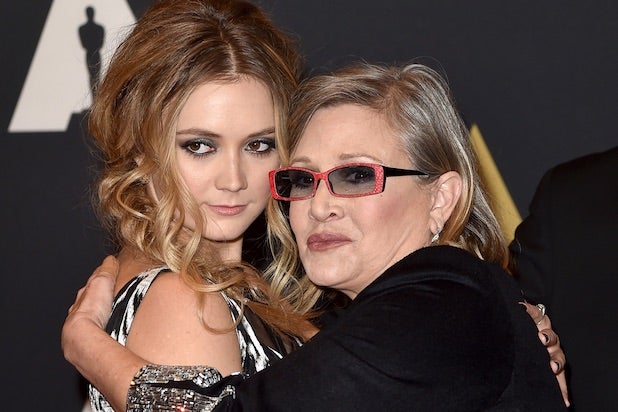 Billie Lourd paid homage to her famous mother, Carrie Fisher, on what would have been the “Star Wars” actress’ 61st birthday Saturday with a throwback photo from her childhood and an emoji-filled message.

“Happy Birthday, Momby,” said the Instagram post that was accompanied by a picture of the mother-and-daughter stars wearing matching nightgowns when Billie was a little girl.

Fisher’s friends, family  and a whole lot of “Star Wars” fans followed suit with tributes of their own.

“Happy Birthday Carrie Fish, I lovaly you Baba. I also miss you very much, Love Tafish. It seemed like only yesterday,” her little brother, Todd wrote on Facebook.

Today would've been Carrie Fisher's 61st Birthday, we miss you so much❤

An icon to so many of us, Rest in Peace. pic.twitter.com/IGxbB3FaLZ

Happy Birthday & Rest In Peace Carrie Fisher, may the force be with you! pic.twitter.com/sfXtmLr7SO

Fisher died on Dec. 27 last year after she suffered a heart attack while on a flight from London to Los Angeles. Lourd’s grandmother, Debbie Reynolds, died one day after Fisher passed at the age of 84.

In an interview with her “American Horror Story: Cult” costar, Sarah Paulson, for Town & Country, Lourd remembered Fisher as someone who always found “the funny” in life.

“If life’s not funny, then it’s just true — and that would be unacceptable,” Lourd said of her mother’s philosophy. “Even when she died, that was what got me through that whole thing. When Debbie died the next day, I could just picture her saying, ‘Well, she’s upstaging me once again, of course — she had to.'”