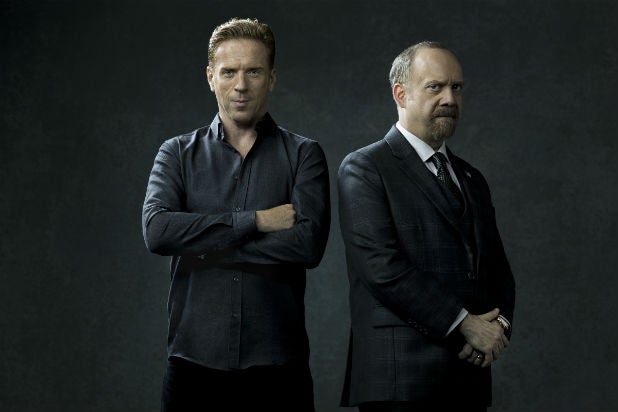 “Billions” showrunners Brian Koppelman and David Levien teased Season 2, saying that the dynamic between the two main characters is about to change.

“We reset the dynamic a little bit, where Axe is taking the offensive and Chuck finds himself under siege,” Levien told TheWrap. “Of course, the show never goes in a straight line. It zigs and zags quite a lot, then they have to work from there.”

Also Read: 'Billions' EP Says Showtime Drama Will Be 'Even More Important for the Next 4 Years'

With dueling investigations haunting both men, they are facing a full frontal assault that will force them to reconsider everything and everyone.

“If you go back to Season 1 and look at how we built to the climax, it was incremental,” Koppelman said. “The same kind of effect happens this year. By the time you get to episodes 9, 10, 11, 12, it has ramped up in a really dramatic way that you have experienced through the characters themselves.”

But of course the series is not just about Axe and Rhoades. Wendy Rhoades (Maggie Siff) finds herself separated from Chuck and working at her own therapy practice after leaving Axe Capital.

“Wendy is stuck between these two guys that she sees so much value in,” Levien said. “The pressure gets greater and greater on her. And they will both stop at nothing to win her back.”

Meanwhile, Lara Axelrod (Malin Akerman) became more and more involved in her husband’s affairs in Season 1, something Koppelman says will only get more complicated in Season 2.

“The dynamic between the two of them intensifies,” he said. “Every character this season feels like they’re facing an existential threat. So Lara is heavily involved in many ways and certainly weighs in on Axe’s business. If you liked what she did last season, you will love what she does this season.”