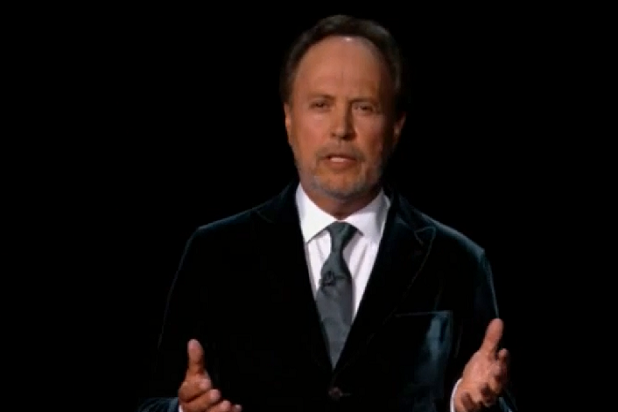 Robin Williams, who died earlier this month at age 63 of an apparent suicide, received a heartfelt tribute from his colleague Billy Crystal at Monday night’s Emmy Awards, with Crystal recalling the deceased funnyman as both a comic genius and a good friend.

“He made us laugh, hard,” Crystal said of Williams at the end of this year’s In Memoriam segment. “I spent many happy hours with Robin onstage; the brilliance was astounding, the relentless energy was kind of thrilling. I used to think that if I could just put a saddle on him and stay on for eight seconds, I was gonna do OK.”

Crystal recalled an impromptu skit at a Comic Relief event for the New York Mets, during which Williams portrayed a Russian baseball player.

“I said, ‘What’s baseball like in Russia?'” Crystal said. “Without missing a beat, he said, ‘Well, we only have one team — the Reds.”

Beyond Williams’ sharp comedic wit, Crystal added, “He was the greatest friend you could ever imagine; supportive, protective, loving.”

Calling Williams “the brightest star in the comedy galaxy,” Crystal said that, though Williams is gone, his work will continue to entertain. Years from now, Crystal said, “The glow will be so bright, it’ll warm your heart, it’ll make your eyes glisten, and you’ll think to yourselves, Robin Williams: What a concept.”

Watch Crystal’s tribute to Williams below: