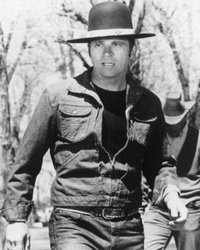 I just heard from Tom Laughlin, better known as Billy Jack, about his latest efforts to get a new sequel of his franchise off the ground. Both Laughlin and his wife Delores Taylor — who played Jean the pacifist to Billy’s rugged vigilante in the famous 1971 film — are eager to reach  a new generation of young people with their message about the injustices they perceive in the world. Laughlin told me about these plans back in 2005, when I wrote about him in The New York Times, but was set back by health problems. Indeed, when he called in the days after the article was published, Laughlin found himself having trouble talking to me on the phone; it turned out he was having a stroke — at that very moment. He has had a series of strokes since then, but says he now feels well enough to pursue the movie project once more. The film he envisions would be entirely experimental, combining fictional and non-fictional footage. He explains it all at www.billyjack.com. I say don’t count him out; Billy Jack is still a guy who’ll never say die.