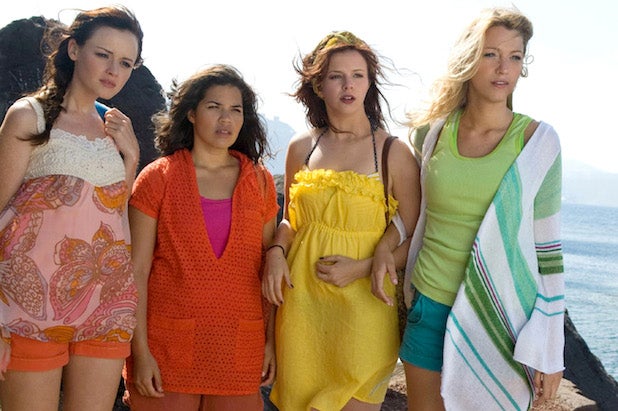 “The Sisterhood of the Traveling Pants” is getting another sequel, as Alloy Entertainment is developing “Sisterhood Everlasting,” which is based on the book of the same title by bestselling author Ann Brashares, the company announced Wednesday.

While there are no deals in place with the original cast, Blake Lively, Alexis Bledel, America Ferrara and Amber Tamblyn have expressed interest in reprising their roles and are in various stages of discussions to return, an individual familiar with the sequel told TheWrap.

One member of the original “Sisterhood” is set to return, as Ken Kwapis will return to direct from a screenplay by Liz Garcia, who will adapt Brashares’ novel.

“Sisterhood Everlasting” finds that the four friends have grown apart in the ten years since the last film in the franchise, though Tibby tries to bridge the distance by reuniting the girls for a trip that will change their lives forever.

“The Sisterhood series is one of Alloy’s most cherished properties and we are looking forward to continuing its legacy with ‘Sisterhood Everlasting’ nearly a decade after the first film was released,” said Alloy president Leslie Morgenstein, who will produce with Elysa Dutton and Christine Sacani. “The original film brought together an incredible group of talent who we hope to unite for fans once again.”

Along with Alcon Entertainment, Alloy was responsible for the first two “Sisterhood of the Traveling Pants” films that were released in 2005 and 2008.