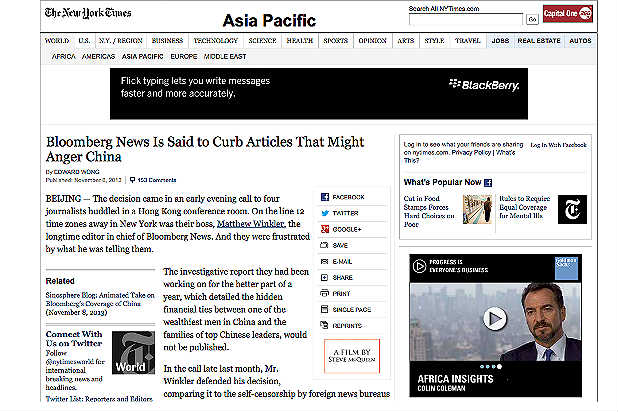 Bloomberg News has rejected a report in the New York Times alleging it killed articles on the corruption of Chinese officials out of fear.

The Times report, published Saturday, claims Bloomberg feared the government would kick its reporters out of the country. Bloomberg’s editor-in-chief Mathew Winkler also reportedly compared this to “the self-censorship by foreign news bureaus […] inside Nazi-era Germany.”

The Times story quotes Winkler’s statements on a recent conference call, and quotes anonymous Bloomberg employees as saying the pressure was internal.

“He said he was looking at the examples of how news organizations worked in Nazi Germany, how they were able to stay there,” one employee told the Times.

Winkler denied the story in the Times, and a Bloomberg News spokesman did the same when reached by TheWrap. “As we were very clear with the Times, it is absolutely false that we postponed these stories due to external pressure,” the company said in a statement.

“We are disappointed that they chose to publish a piece that claims otherwise.” China has punished both news organizations in the past for stories about corruption in the world’s second-largest economy.

The Chinese government blocked the Bloomberg website after it published articles on the wealth of Chinese leaders, including the new Chinese Communist Party chief Xi Jinping. The New York Times has been blocked in China after it ran a series of incendiary pieces on corruption, including a story about the wealth of the former prime minister.

Stories are often held or postponed because they are not ready, and that seems to be the case here. Though the Times’ story reports the stories are killed, it concludes with a Bloomberg reporter being ordered to get more evidence.

An animation company critical of the Communist Party also made its own video, portraying the company’s namesake (and New York’s outgoing mayor) getting on his knees and bowing before a Chinese official (and a panda).

As for the Bloomberg employees, it compares them to robots.

The New York Times referenced this animation, which has a couple thousand views on YouTube. It also reached out to Bloomberg for comment on it, which Bloomberg did not give.