The Walt Disney Company has extended Bob Iger’s contract to July 2, 2019. The 66-year-old will continue to be the company’s chairman and chief executive officer until at least then.

“Given Bob Iger’s outstanding leadership, his record of success in a changing media landscape, and his clear strategic vision for Disney’s future, it is obvious that the Company and its shareholders will be best served by his continued leadership as the Board conducts the robust process of identifying a successor and ensuring a smooth transition,” Orin C. Smith, independent lead director of the Disney Board, said in a statement Thursday.

“Mr. Iger has led The Walt Disney Company to unprecedented success during his 11 years as CEO, driving Disney to new creative heights, expanding the Company’s global reach, fostering technological innovation, and delivering year-after-year of record financial results,” he continued. “During his tenure, Mr. Iger has created enormous value for shareholders, with total shareholder return of 448 percent, compared to 144 percent for the S&P 500, and a dramatic increase in the company’s market capitalization to $177 billion from $46 billion.”

It was generally expected that Iger would step down from the post when his contract was previously set to expire in June 2018, and that a successor would be named soon. Recently, however, he killed any notion that a departure next year was a certainty, and no likely successor has emerged.

“Leading this great company is a tremendous privilege, and I am honored to have been asked to continue serving as CEO through July 2, 2019,” Iger said in the announcement regarding his extension. “Even with the incredible success the company has achieved, I am confident that Disney’s best days are still ahead, and I look forward to continuing to build on our proven strategy for growth while working with the board to identify a successor as CEO and ensure a successful transition.”

Details of the extended agreement will be included in a Form 8-K filed today with the Securities and Exchange Commission.

Disney’s stock (DIS) enjoyed a mini-surge after news of the boss sticking around broke this morning at 11 a.m. ET. Here’s a snapshot of the movement: 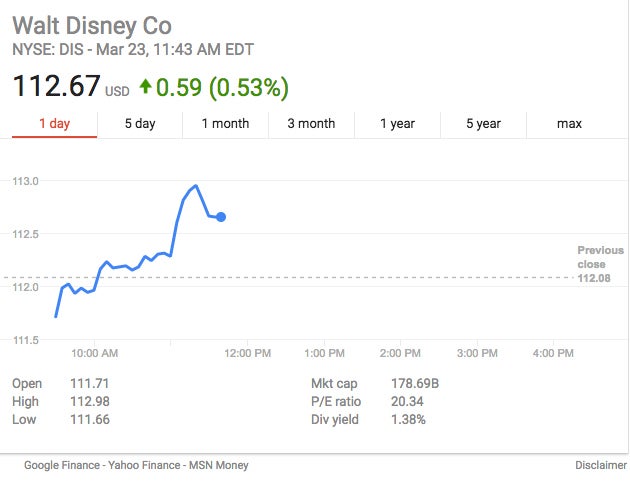 Former Disney Chief Operating Officer Thomas Staggs, long presumed to be Iger’s heir apparent, stepped down last April after failing to get assurances from the company’s board that he would be tapped for the role.