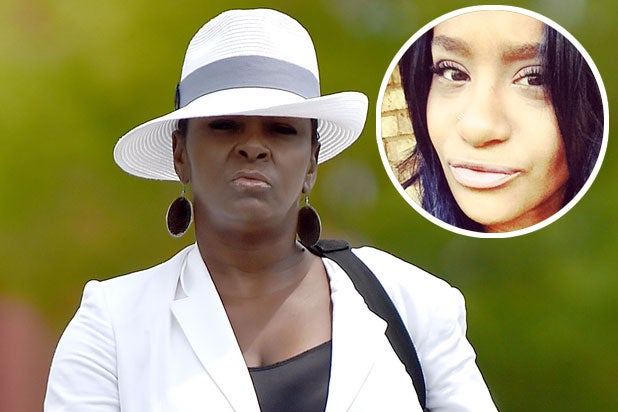 Leolah Brown, aunt of Bobbi Kristina Brown — the ill-fated daughter of Whitney Houston and Bobby Brown who died last month a age 22 — is continuing to fan flames in her heated campaign against Pat Houston.

Brown took to Facebook on Thursday to assert that she, not Houston, was granted guardianship of Bobbi Kristina Brown by Whitney Houston.

Referring to her rival as “Pat Garland,” Brown begins her post, “To all media, I am just reading all this garbage that evidently is being fed to you. Pat Garland has NEVER been a ‘guardian’ over my niece Bobbi Kristina Brown. That was THE BIGGEST LIE TOLD by her and whomever supported that lie.”

The post continues, “She was ‘PUT’ over the estate by [Bobbi Kristina’s grandmother] Cissy — Yes! However, Whitney would NEVER allow that. Whitney knew Pat hated her and would NEVER do that!”

Brown goes on to assert her guardianship over her niece, writing, “I, Leolah Brown was the only one that Whitney left guardianship to when it came to Bobbi Kristina. This is the main reason Pat hates me! Time is out for LIES! The Brown & Houston family knows I am telling the truth.”

On Thursday, Brown vowed to keep the heat on Pat Houston, writing, “Please be aware that this IS NOT OVER with Mrs. Pat Watson Garland and I. There is so much more to come. The world will hear THE TRUTH by Me. Make no mistake about that,” Brown wrote.”BOBBI KRISTINA AND WHITNEY HAVE NOT LEFT US IN VAIN!”

Bobbi Kristina Brown died last month after being found face-down and unresponsive in the bathtub of her Georgia home on Jan. 31. In May, as Bobbi Kristina clung to life, a judge granted Bobby Brown and Pat Houston guardianship of her.