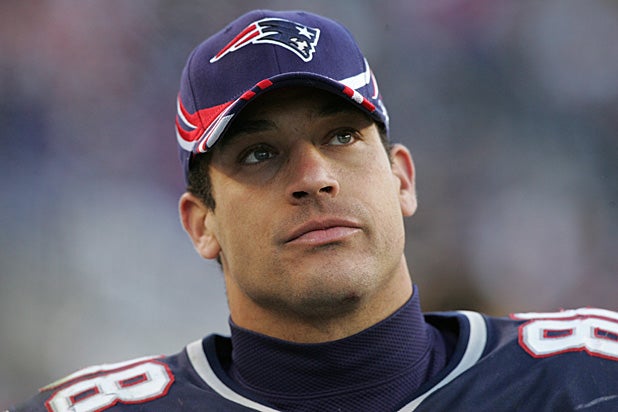 Radio personality and former New England Patriots tight end Christian Fauria (above) was put on suspension Monday after he mocked Tom Brady’s agent, Don Yee, by talking on-air in a stereotypical Asian accent, the Boston Globe reported. Fauria’s remarks were in response to a prankster who fooled Boston Herald columnist Ron Borges into writing a story last week that turned out to be fake.

According to the Globe, at least five advertisers including Comcast, Citizens Bank and two state-run agencies have pulled commercials and sponsorships from WEEI this week.

The Boston Red Sox also released a statement expressing their “frustration and disappointment” with the station’s corporate owners, the Boston Herald reported on Wednesday.

“We have had a growing level of concern, and we’ve expressed that very clearly to their management, especially over the past year — and in the past week and in the past few days,” Sox president and CEO Sam Kennedy said.

“This pattern of controversial incidents is exhausting, I think, for listeners and fans in general. It’s something that Entercom (WEEI’s parent company) is smart to address,” he added.

A representative for WEEI did not immediately respond to TheWrap’s request for comment.

The latest incident comes in the wake of fellow WEEI host Alex Reimer’s suspension for making derogatory comments about Brady’s five-year-old daughter, Vivian, calling her “an annoying little pissant” after she appeared on the Facebook Watch show “Tom vs. Time.”

In response to the outcry, WEEI has now marked off Friday as a day committed to sensitivity training for its employees, thereby taking all shows off the air from 6 a.m. to 6 p.m. ET.

“Nothing is more important to WEEI than the close-knit and diverse Boston community we call home, and we are committed to actively contributing to its betterment. WEEI is in the process of closely reevaluating our policies and procedures in an effort to ensure that our programming is never intolerant or harmful to our listeners and our city,” the station said in a statement.