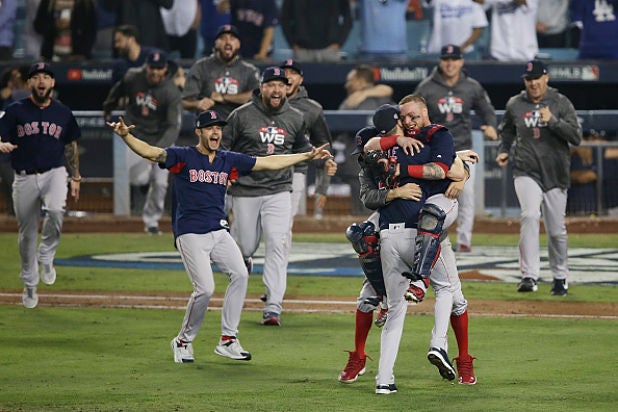 The Boston Red Sox defeated the Los Angeles Dodgers, 5-1, on Sunday night at Dodger Stadium to win their fourth World Series since 2004.

Powered by a dominant performance by David Price, who pitched into the seventh inning of Game 5, and clutch hitting from first baseman Steve Pearce, the Red Sox won the series in five games. Chris Sale stuck out Dodgers shortstop Manny Machado to clinch the series.

The Red Sox rebounded from losing a marathon 18-inning game on Friday night that bled into Saturday morning, by winning the next two games to capture the Commissioner’s Trophy.

Boston got off to a quick start in the series, winning Games 1 and 2 at Fenway Park behind clutch hitting from utility player Eduardo Nunez and strong pitching. The Dodgers struck back in Game 3, with a Max Muncy solo home run winning the game in the bottom of the 18th inning, bringing the longest game in MLB playoff history to a close.

The Dodgers tried to sustain that momentum going into Game 4, breaking out to a 4-0 lead highlighted by a Yasiel Puig home run in the sixth inning.

But after a seventh-inning pitching change by manager Dave Roberts, the Dodgers quickly collapsed, with the Sox tying up the game in the eighth before scoring five runs in the ninth inning and winning 9-6. It was the first time all season that the Dodgers have lost after taking a four-run lead. They were previously 54-0.

It has been a century since the Red Sox won the 1918 World Series on the back of Babe Ruth, a victory that would be followed by an 86-year championship drought that stands among the most infamous in sports.

But since ending that drought in 2004, the Red Sox have claimed the World Series title in 2007, 2013, and 2018. The Dodgers, on the other hand, end the season as runner-up for the second straight year, having lost to the Houston Astros in a seven-game series last year.

Powered by pitchers Price and Sale, and a long lineup that’s headlined by MVP candidates Mookie Betts and J.D. Martinez, the Red Sox went 108-54, winning the American League East. On their march to the World Series, the Red Sox defeated their arch-nemesis, the New York Yankees, in four games in the ALDS, before dispatching the Houston Astros — the 2017 champs — in five games in the ALCS.

Red Sox manager Alex Cora — who won a World Series title as a player in Boston — joins John Farrell and Terry Francona to win the championship since the team famously broke the “Curse of the Bambino” in 2004. Coincidentally, Cora, Farrell and Francona all won a title in their first year on the job.