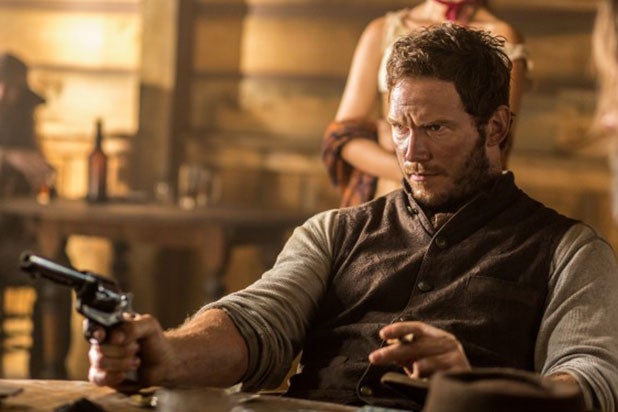 Featuring an all-star cast led by a witty and smoldering Chris Pratt and a stoic Denzel Washington, MGM and Columbia’s “The Magnificent Seven” is set to top the box office this weekend with an estimated $35 million.

The Western, which has a 64 percent Rotten Tomatoes score, made $12.7 million on Friday from 3,674 theaters. It has an A- CinemaScore from audiences surveyed on opening night.

It’s on track to top the debuts of other recent movies in the genre: “Django Unchained” opened to $30 million, “True Grit” debuted to $24 million and “The Lone Ranger” lassoed $29 million when it launched in theaters — the last widely-released PG-13 film in the category.

It made $5.7 million on Friday and has a 62 percent Rotten Tomatoes score and an A- CinemaScore.

The animated feature was made for $70 million, and is playing in 3,922 locations. It has also opened in 33 international markets this weekend, including China, Russia and Brazil — which will add grosses on top of its aforementioned domestic tally.

Both “Storks” and “The Magnificent Seven” were generating a good amount of social buzz, according to comScore’s PreAct tool. The Western represents nearly 16,000 new conversations online in the past week, with a cumulative total of more than 90,000. WAG’s animated feature inspired more than 11,000 social media mentions in the past week, with an overall total of nearly 65,000.

Produced for $90 million, it was co-financed with LStar Capital and Village Roadshow Pictures.