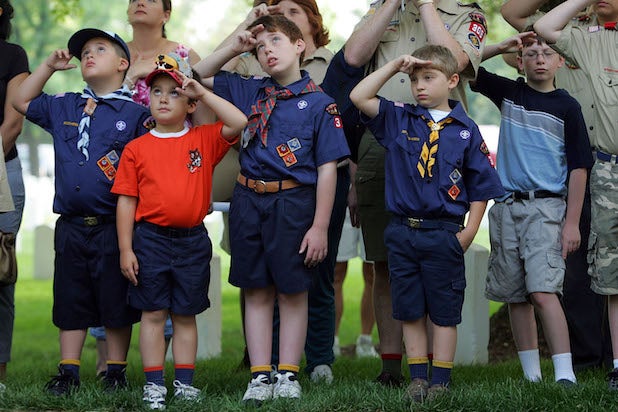 BSA announced Wednesday it’s cutting that gender-specific part of the group’s moniker in its attempt to become a scouting choice for both boys and girls. As of next February, the Boy Scouts, which includes kids from 10 to 17, will become Scouts BSA.

“As we enter a new era for our organization, it is important that all youth can see themselves in Scouting in every way possible,” Chief Scout Executive Mike Surbaugh said in a statement while touting the program’s new marketing campaign to promote inclusiveness, “Scout Me In.”

The parent organization, Boy Scouts of America or BSA, will not see a name change, and neither will the gender-neutral name for the Cub Scouts, a program for kids 7-10 years old.

Last year, BSA announced it would start providing programs for girls and before that revealed it would accept transgender children. In 2015, the organization ended a ban on gay troop leaders.

When the announcement was made, reactions popped up on Twitter and there was a clear divide between those who think the change is unnecessary and individuals who think it’s harmless.

“I am a proud Eagle Scout,” Charlie Kirk, founder of Turning Point USA, tweeted. “It is a national disgrace that girls are being allowed into the Boy Scouts.”

“I remember joining the Boy Scouts and at the first meeting they announced that we’d be required to go camping every month. I never went back,” comedian Mike Drucker wrote. “Anyone who wants to live that nightmare life is welcome to it.

See some of the other reactions to the name change below.

There's something deeply sad about a society that presses for the Boy Scouts to stop being the Boy Scouts. And there is something hilarious about the Girl Scouts now complaining that the no-longer Boy Scouts will accept girls. https://t.co/vbtcxGhcBJ

Let the tragic self-destruction of the Boy Scouts be a lesson to us all. Begin surrendering to the Left, and they will not be satisfied until you are completely obliterated.

We learn two things from the self-destruction of the Boy Scouts organization:

1) The Left will eat you alive if you compromise with them.

2) Boys are not allowed to have any of their own spaces in this ridiculous culture we've made for ourselves.

When the Boy Scouts announced that it’d create programs for girls, the Girl Scouts responded by basically saying BTFO (except in much, much, much nicer terms) https://t.co/rBozPlaUlH

I am a proud Eagle Scout

I remember joining the Boy Scouts and at the first meeting they announced that we'd be required to go camping every month.

I never went back.

Anyone who wants to live that nightmare life is welcome to it.

While conservatives are outraged over the Boy Scouts changing their name to "Scouts BSA", they are turning a blind eye to the fact that our President is considering selling missiles to Ukraine in exchange for them not releasing potential criminal evidence on Trump aide, Manafort.

So Boy Scouts are changing their name to Scouts BSA because girls are joining the Boy Scouts, but Girl Scouts still exists. What ?

I was in the first class of women to graduate from my college.

I thought we had it tough. We were verbally harassed daily by classmates who were afraid of change.

These girls are tougher. They're standing up to cyberbullying from grown men in Boy Scouts uniforms. https://t.co/ZtmsRamGJv

Hollywood has a long way to go toward fair pay

Today is Equal Pay Day, dedicated to equal pay for men and women. But in Hollywood, a true equal payday is a long way away. Here are 14 horrifying stats, and some telling anecdotes.