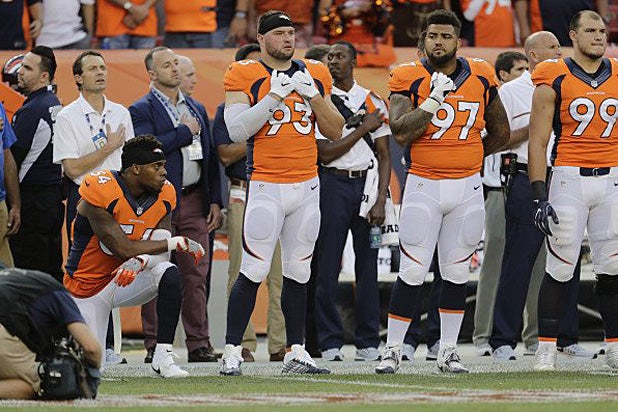 Brandon Marshall joined his former college teammate Colin Kaepernick’s protest against the national anthem by taking a knee ahead of Thursday night’s NFL season opener, but the move has cost him an endorsement deal.

The Air Academy Federal Credit Union said it will no longer be backing the Denver Broncos linebacker due to his political statement, which many people perceive as disrespectful to the military.

“Although we have enjoyed Brandon Marshall as our spokesperson over the past five months, Air Academy Federal Credit Union (AAFCU) has ended our partnership,” President/CEO Glenn Strebe said in a statement via Facebook Friday.

“AAFCU is a membership-based organization who has proudly served the military community for over 60 years. While we respect Brandon’s right of expression, his actions are not a representation of our organization and membership. We wish Brandon well on his future endeavors.”

The Air Academy Federal Credit Union is a Colorado-based credit union the serves active and retired members of the U.S. military.

In a post-game press conference after the Broncos pulled off a tight 21-20 win over the Carolina Panthers Thursday night, Marshall told reporters why he a took knee — and pledged to donate “an undisclosed amount” of money to U.S. military veterans.

Also Read: Ryan Lochte's Bad Night In Rio Will Cost Him a Million -- But At Least He Won't Have a Sore Throat

“Colin is my fraternity brother, my ex-teammate,” the University of Nevada alum said. “I support Colin and what he’s trying to do.”

“I feel like this is the right platform,” he continued, according to NFL.com. “This is our only platform to really be heard. … I feel like a lot of times people want us to just shut up and entertain them, shut up and play football. But we have voices as well. We’re actually educated individuals that went to college.”

Also Read: 3 Why Reasons the NFL Isn't the Box Office Killer You Might Think

“So when we have an opinion and we speak it, I feel like a lot of people bash us for what we have to say,” Marshall concluded.

Kaepernick has also been joined in his stance by teammate Eric Reid and Seattle Seahawks cornerback Jeremy Lane.